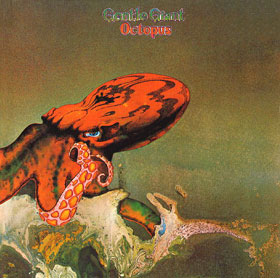 Progressive rockers Gentle Giant released Octopus, their fourth album, in December 1972. Allowing that Gentle Giant’s music is nothing if not an acquired taste, Octopus is among their best work. The album got a long-awaited CD reissue on the group’s own Alucard label in 2011. That release featured excellent sound along with a booklet containing brief modern-day comments from band members. It also featured a live track titled “Excerpts from Octopus,” from a July 3 1976 performance in New York. (The entirety of that concert has since been released as Live at the Bicentennial 1776-1976.)

Now there’s an even newer Octopus reissue that aims to supplant the now-deleted 2011 reissue. What makes the new version (released late 2015) worthwhile is the involvement of Steven Wilson. In addition to his important work as a solo artist, with Porcupine Tree, Blackfield and other projects, the modern-day progressive rock hero is enjoying well-deserved acclaim for his careful remixes of classic prog albums. He’s done work on many titles from the catalogs of Caravan, King Crimson, and Jethro Tull, just to name a few. And his work on Gentle Giant’s Octopus is no less brilliant. The 2015 version includes two discs. The first is an audio CD featuring a Wilson remix of the ’72 album, sourced from the master tapes, of course. The second disc is a Blu-ray, and features the entire album in three versions: 96/24 Stereo LPCM, DTS 5.1, and a “flat transfer” of the original mix from more than forty years ago. What’s more, instrumental remixes of five Octopus tracks serve to highlight just how amazing a group of players Gentle Giant was in those days.

An Anil Prasad liner note essay fills in the gaps in the story, and corrects the oversight of not including something like it on the 2011 reissue.