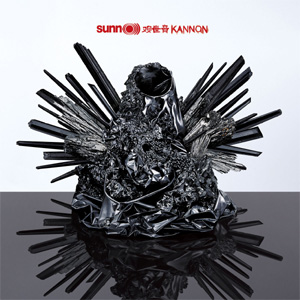 File next to: Godspeed You! Black Emperor, Earth, Glenn Branca

It’s easy to dismiss the pummeling, sludgy, drone-rock of Sunn O))) as noise; even fans of the group might happily admit that noise isn’t an unfair word to describe the group’s music. But behind the dense sonic curtain of their non-tempo music – there’s nothing in the way of a beat to establish a tap-your-foot baseline – there are clear hints of nuance and sophistication. The avant-garde work of Glenn Branca, with its intentional creation of overtones (i.e. the sonic suggestion of instruments and textures that aren’t really there) is a clear precedent for the three epic-length works that make up Kannon, the group’s seventh studio album. It’s malevolent music, to be sure, but sitting at home and absorbing Kannon is probably a safer and more rewarding endeavor than subjecting oneself to near-certain ear and/or nerve damage at a live show.