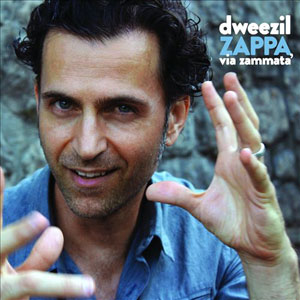 Today, Dweezil Zappa might sound like a chip off the old block, but it wasn’t always so. On his first release – 1982’s single “Crunchy Water” b/w “My Mother is a Space Cadet” – he sounded like a reasonably talented kid who owned some Van Halen records. But in the ensuing decades, establishing himself as one of the foremost curators of his dad’s body of work, Dweezil has honed his craft. No doubt his deep immersion into the work of Frank Zappa (not to mention his close association with musicians who could actually play the stuff) has informed his own musical endeavors. On Via Zammata’ he distills the easily overwhelming compositional influence of his father into something he can rightly call his own. “Funky 15” could sit comfortably alongside the elder Zappa’s work circa 1981’s You Are What You Is. The delightful “On Fire” sounds like what might have happened if the dear departed pop genius Owsley had hired Frank Zappa as an arranger. And the spoken-word bits throughout the record recall The Tubes‘ “Wild Women of Wongo.” With a more finely-tuned pop sensibility than Frank had, Dweezil synthesizes the family brand of adventurousness into a more mainstream kind of music.