Some years ago in a print feature, I characterized Colin Edwin – then the bass player in Porcupine Tree – as “eternally bemused.” The music of Porcupine Tree is adventurous, aggressive, and melodic, but (it must be said) rarely what one would call…humorous. But through it all, the highly skilled bass guitarist wore an expression that suggested he was mildly amused by the whole affair.

That characterization gave the Australian-born Edwin a bit of a chuckle. He’s certainly good-natured enough – as his long list of collaborative musical credits suggests – but he’s one serious musician as well. Two of his most recent projects are a new progressive rock group O.R.k. and a duo with Alessandro Pedretti called Endless Tapes. 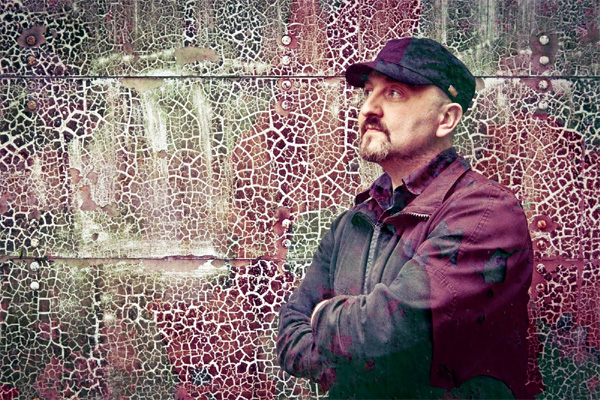 Both projects make at least some use of a most common collaborative method: file sharing. Modern technology has largely freed musicians from the (often burdensome, as well as logistically and financially prohibitive) requirement of showing up together in a single studio at a specific time. Emailing individual parts back and forth allows musical collaborations which would otherwise be all but impossible. O.R.k.’s debut album Inflamed Rides was assembled in this fashion. “I didn’t know [guitarist] Carmelo Pipitone at all,” says Edwin. “I had met Lorenzo Fornasari [aka Lef] quite a few times before; the first time I met him, I was playing with Metallic Taste of Blood. I got to know the two of them during a [Lef] project called Twinscapes. And then I got involved with Obake, which is a very heavy thing; Lorenzo is also the singer in Obake.” So the musicians’ paths had crossed quite a bit.

“But we hadn’t actually done anything together,” says Edwin. Lorenzo Fornasari “had said to me sometime in the past, ‘It would be great if we could do something together.’ I like what he does, and the Obake stuff was great, so I said, ‘Yeah, sure.’” Fornasari followed up not long thereafter, inviting Colin Edwin to take part in a project that also included Pipitone. “The first [recording] they sent me was ‘Pyre.’ It was great, but I didn’t really do much with that one, other than play bass to it. It was kind of complete already.”

Going forward from there, Edwin was involved on a more fundamental level with what would become O.R.k. “We’d start with Carmelo’s riffs, and then I would do some basic programming, and add bass [to a track]. Sometimes there would be a guide vocal from Lorenzo. And some of the stuff was [based upon] riffs I had hanging around; in those cases, things worked in reverse. It all came together really, really quickly; usually, at any one time, I’m concurrently working on many different things.” 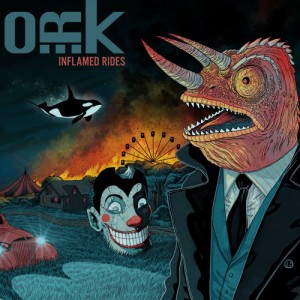 Without at first realizing it, the collaborative project had yielded a nearly-finished product. “One day Lorenzo said to me, ‘We’ve got an album!’ To my mind, we had only done four or five tracks. But when I sat down and counted them, we had enough.”

Edwin describes the creative process among himself and the two Italian musicians as “push and pull. Lorenzo, being Italian – though he speaks fantastic English – occasionally gets stuff wrong with pronunciation. So he said to me, ‘Can you help me with the lyrics?’ I ended up writing lyrics for two of the tracks.” Edwin also helped with some of Fornasari’s lyrics. “We didn’t want any unintentionally comic moments. There are some words that you don’t really want to get wrong or mispronounced,” Edwin laughs.

Speaking of pronunciation, is the band name pronounced “Ork,” or does one speak the three letters? “You can choose,” laughs Edwin. “I like the idea that it’s an acronym, but it depends on whom you ask. And it depends on how you’d say ‘Ork.’”

Whatever they’re called, O.R.k. was never intended as a purely studio effort; the band – with the in-demand Pat Mastelotto (King Crimson) on drums – scheduled a European tour to promote Inflamed Rides. “Happily, we hooked up very early with a very good Italian booking agent,” Edwin says. “Carmelo has quite a good profile in Italy. And as usually is the case, one thing leads to another. So once we had some decent gigs there, there was more interest from other people.” But booking a tour remains quite tough. “These days, promoters really don’t want to take a risk. And that’s understandable. So the tour is perhaps a bit shorter than we would have liked. But at the same time, we’re able to string together a tour that makes sense as an initial run to see how things go. Because anything new is a challenge.”

Edwin notes that “we’ve had a great response to the record; a lot of interest. But translating that into [concert promoters] wanting to take a risk on you is another story, really.” Still, progressive and heavier rock styles are more commercially viable on the European continent than in most other places. “The biggest challenge for a European band coming to America is the work permit situation,” Edwin says. “It’s very difficult to go through that process. It’s expensive and complicated. You have to have a petition; you usually have to have someone in the States to sponsor you; you have to go through an interview at the U.S. Embassy where they scan your eyeballs and such.” To do that for a band and crew adds up to many thousands of dollars, so unfortunately, American audiences shouldn’t look for an O.R.k. tour anytime soon. “It takes them a long, long time to process it,” Edwin observes.” and on top of that, there’s the cost of flights.”

Edwin recalls reading a story about a Dutch band who planned to tour the USA. “They had to pay their deposit on their [tour] bus, pay crew members, book flights. And then nothing came through in time. They lost about $15,000. And at that level, that’s crippling. And I don’t think a lot of people in America are aware of all that. For European bands, you can’t just roll up and pay $30. And if you don’t do it right, there’s a severe penalty as well. There have even been cases where people have been banned for five, ten years.”