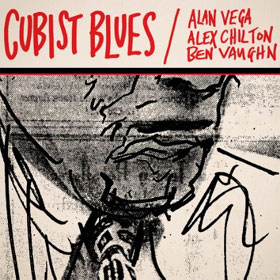 File next to: Tav Falco and Panther Burns, Suicide, Jesus and Mary Chain

One of the more unlikely musical summits in recorded history, this one-off album was made in two days in December 1994 and is finally back in print. All three participants brought the baggage of their individual reputations: Big Star refugee Alex Chilton was notorious for his cavalier approach, as evidenced by the tossed-off nature of albums like Bach’s Bottom and Like Flies on Sherbert. Alan Vega‘s work with Suicide proved him as uncompromising an artist as one could conceive, while Ben Vaughn was the most singer-songwriterly of the lot. Cubist Blues succeeds at its stated goal of recording controlled chaos: sounding as if it was captured live in an empty warehouse, the album’s production aesthetic is decidedly one-note (not to mention one-take). Perhaps best described as “late-night, laid-back psychobilly,” this is a timeless document of outsider artists doing their thing.