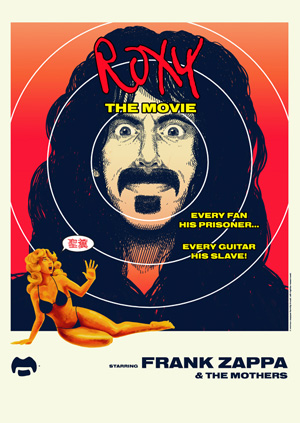 There’s no consensus among Frank Zappa fans as to which album is his “best.” But most will agree that the 1974 double-live LP Roxy & Elsewhere is a high point. Recorded in L.A. over three nights in December ’73, the album captured The Mothers’ unique mix of bizarre lyrics, astounding and intricate musical interplay, and rapport with the audience.

The shows were filmed, and Zappa tried for years to correct the synchronization problems that plagued the footage. But the technology to do so didn’t yet exist, and Zappa died in 1993 without finishing it. Happily, 21st century technology has allowed the previously-unthinkable: this new CD+Blu-ray package presents the long-planned film as well as a CD with versions of the songs not found on the 1974 album. Forty-plus years is a long time, but Roxy is worth the wait; it’s an absolutely essential entry in Zappa’s massive catalog.

The lineup of Zappa’s Mothers of this period was easily among its best: stunningly facile percussionist Ruth Underwood on vibes, marimba and assorted instruments is a star of the show, as is the inimitable George Duke on electric piano and other keyboards. But the rest of the band – including brothers Bruce Fowler (trombone), Walt Fowler and bassist Tom Fowler, all shine. Zappa himself excels as demented musical puppeteer / master of ceremonies / occasional hot-shit lead guitarist. And the dual-drummer backline of Chester Thompson and Ralph Humphrey powers the engine. Napoleon Murphy Brock is delightfully energetic as he handles tough vocal parts and puts on a show simultaneously.

There’s material here that wasn’t on the old Roxy & Elsewhere set in any form, and while some may prefer the versions of song on that 2LP set over some of the ones here, Zappa fans really need both. The visual component alone makes it necessary viewing. John Albarian‘s brief but informative liner note essay gives some important background on the performances, the film, and why there’s been a more than forty year gap between the two.