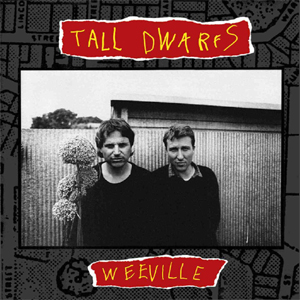 As I discussed in yesterday’s review of Chris Knox‘s Seizure, famed New Zealand independent label Flying Nun has released that title and Tall Dwarfs‘ Weeville on vinyl LP. Some might argue that mentioning Knox and Tall Dwarfs is a distinction without a difference; Tall Dwarfs is, after all, Knox plus musical co-conspirator Alec Bathgate. But while Knox’s solo work features electric guitar as its primary (and often only) instrument, Tall Dwarfs utilizes a wider sonic palette.

But hey, not much wider. The spare, homespun aesthetic that’s a hallmark of Knox’s work is ever-present on Weeville. The 7” booklet that accompanies this vinyl reissue provides detailed who-does-what info, and most of the credits are for things like “backwards guitar” and “loops.”

1990’s Weeville was the first album-proper from Tall Dwarfs; the earlier Hello Cruel World was a compilation drawn from the group’s EPs. Weeville‘s spotlight tracks include “What More,” which, with its gravelly vocal, is reminiscent of – of all things – Caravan‘s reading of Soft Machine‘s “Feelin’ Reelin’ Squeelin’.” But it adds some country blues slide guitar. “Breath” sounds a bit like 1960s garage rock, and would be a good candidate for another band to cover in a fuller arrangement. The endearingly ramshackle “Crawl” wouldn’t have been out of place on Syd Barrett‘s The Madcap Laughs.

“Lucy” is a woozy psychedelic piece that sounds a bit like the legendary and unidentified not-the-Beatles bootleg track, “Candle Burns.” It’s also not altogether unlike something of Athens’ Olivia Tremor Control (members of the latter are up-front about having been influenced by Tall Dwarfs). With its bleating Farfisa organ, “Bodies” sounds like early Pink Floyd. The winning, chiming “Mr. Broccoli,” on the other hand, sounds like a Robyn Hitchcock hit, if such a thing existed.

The clattering “The Winner” sounds most like the music on Knox’s Seizure. The lyric, “Hey fuckface, whatcha tryin’ to do?” guaranteed no airplay, though that wasn’t seriously in the cards anyway. The beatboxing “Ozone” brings back that droning vocal from “What More.” Weeville closes with the contemplative, slightly downcast “Hallelujah Boy.”

Appreciating many of the songs on Weeville requires acceptance of the duo’s chosen method of delivering the songs. Had these tunes been presented in a more conventional format – in other words, the kind of arrangement and production that gets songs played on radio – it’s quite easy to imagine Weeville having been as commercially successful as, say, Crowded House. But doing so would have been inconsistent with Tall Dwarfs’ chosen path. So here we are. The album sounds as if it was recorded on a Tascam cassette Portastudio. Honestly, I wouldn’t be a bit surprised to find that it had indeed.

The accompanying booklet reinforces the connection (in my mind, at least) between what Tall Dwarfs were doing and what Stephen Michael Fievet was creating half a world away as LMNOP. That same inerrant pop sensibility wedded to an idiosyncratic approach that all but precludes commercial success is the hallmark of Weeville. Music like this demands a bit more of the listener, but the rewards are well worth that effort.