DVD Review: Frank Sinatra — All or Nothing at All 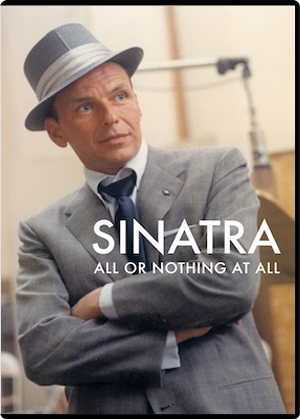 When I was growing up, Frank Sinatra made what was considered music for adults. I distinctly remember when his duet with daughter Nancy Sinatra, “Somethin’ Stupid,” was all over the pop airwaves back in 1967, during the Summer of Love. As I recall, it was right alongside AM radio Top 40 hits by The Mamas and The Papas and such. I remember thinking it was…well, the word wasn’t quite yet in my vocabulary, but…kitsch. Square. Certainly not for me.

Times have changed, at least for me. Possibly helped along by The Smithereens‘ sublime version of that tune (found on the wonderful odds ‘n’ sods release Attack of the Smithereens), I’ve grown to appreciate the music of Francis Albert Sinatra, the man born in Hoboken New Jersey on December 12, 1915, one hundred years ago tomorrow.

My parents weren’t heavily into music – at least not in a comparative sense – but they had an LP collection that numbered in the few hundreds. And Sinatra’s music formed a significant part of their collection. “Their song,” in fact, is a (cough) little known tune called “How Little We Know.” It first appeared as the a-side of a Top 40 charting 1956 single, and was compiled on the 1958 collection This is Sinatra, Volume Two. Compared to the countless gems in Sinatra’s massive discography, it’s a slight tune, but it invariably brought tears of joy to my mom and dad. As I’ve aged and discovered grey hairs on my head, I’ve grown to appreciate the song.

I’ve also completely fallen in love with Frank Sinatra’s music. My own tastes lean toward his swaggering, upbeat material; I experience paroxysms of delight every time I hear “The Coffee Song” from his 1961 Reprise album Ring a Ding Ding; even the hamfisted lyrical twists have an odd, goofy appeal.

A new 2DVD documentary, All or Nothing at All, takes on the task of documenting the man’s life and career. No easy task, and because of Sinatra’s incalculable popularity and influence on the pop culture of the 20th century and beyond, it would be all too easy – effortless, really – to slip into hagiography.

But Academy Award-winning director Alex Gibney is no stranger to difficult subjects. His recent works include the incendiary (but evenhanded and unassailable) documentaries Going Clear: Scientology and The Prison of Belief and Enron: The Smartest Guys in the room, to name but two. He also directed the television documentary miniseries The Fifties, a 1997 companion to journalist David Halberstam‘s book of the same name (one of my personal favorite books; I’ve read it at least four times). No doubt thanks to Gibney’s guidance (with the help and cooperation of the Frank Sinatra Estate), All or Nothing at All is an unflinching look at Sinatra the man, the myth, the musician.

Overused documentary biopic tropes are kept to a strict minimum (and for once, the ubiquitous Bono is not on hand to offer his perspective). With one very brief exception near the start of the second disc, all of the archival commentary that effectively forms the film’s narration features off-screen speakers. Archival audio of Sinatra himself is used extensively, and, seemingly, whenever possible to tell the story. And Gibney’s technique of enlisting voice actors to read (in character) from the diaries of deceased associates of Sinatra is wonderfully effective. Those voice actors – Gina Gershon and Vincent D’Onofrio among them – do a superb job of bringing written words to life.

The amount of research it took to mount this exhaustive documentary must have been staggering. But even when it uses family photos, home movies, and relevant stock footage to illustrate its story, All or Nothing at All never looks like a by-the-numbers biographical film. And that’s because it isn’t. There’s lots of music to be found, of course, and much of it comes via Gibney’s inspired method of anchoring the story.

In 1971, a tired and burned out Sinatra announced his retirement from the music business. Though his hiatus would prove to be short-lived, the announcement provided him the opportunity for a farewell concert. And as is explained in All or Nothing at All, Sinatra carefully chose the songs – and the song order – to provide a tidy (well, not exactly tidy…) summation of his life and career. Using excerpts from the wonderfully unvarnished film of that performance, Gibney uses each successive song as a signpost, a mile marker in Frank Sinatra’s life and career.

The film never shies away from Sinatra’s often combative demeanor, his numerous affairs, his purported ties with organized crime. But it places those subjects into the greater context, one that illustrates the vocalist’s deep and abiding interest in the issues of bigotry and injustice. All or Nothing at All never paints its subject as any kind of saint, but it fleshes out a character who is at once larger than life and seemingly unreal, humanizing the icon.

One minor criticism of the film – the only one I can come up with, as it happens – is the too-brief discussion of Frank Sinatra’s work with Count Basie; it is mentioned, but only within the context of a performance at a prison facility.

The film is especially instructive as it documents the growth of the Sinatra phenomenon; anyone who believes that Beatlemania (or Elvis mania) was unprecedented is in for a bit of a shock. Anyone with even the slightest interest in popular culture of the Western world these last hundred years or so simply must see All or Nothing At All. I recommend it in the strongest terms. And – note to self – I must get a copy to my parents as soon as possible.

Note: The film is also available in other configurations, including a Blu-Ray edition and a 2DVD+2CD set; this review addresses the 2DVD version.