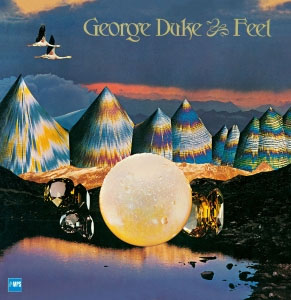 Vol. 3: Feel
Released in October 1974, Feel again featured bassist John Heard and drummer Ndugu alongside George Duke, but his guest artists lent a decidedly adventurous air to the disc: husband and wife Airto Moreira (the Brazilian percussionist Duke knew well through his association with Julian “Cannonball” Adderley) and Flora Purim, plus a guitarist known here as Obdewl’l X (Frank Zappa, adopting a pseudonym similar to a character name he’d use on his own 1984 Thing Fish box set).

“Funny Funk” is Stevie Wonder-styled instrumental funk with jazz chops at its best. Duke’s multitracked keyboards (electric piano, throbbing synthesizer) engage in playful dialogue, while Ndugu nails down an inventive beat. “Love” starts out sounding like a more accomplished, slightly more adventurous version of smooth jazz, with Duke adopting a vocal style not unlike George Benson. But bits of Airto’s percussion suggest something more interesting is afoot. And sure enough, a brief if manic Zappa guitar solo punctuates the laid-back feel. A second guitar solo from Zappa leans a bit more in a jazz direction, but still retains plenty of fire. Duke takes a lengthy solo on synth over a jazzy vamp. And then just when the tune seems to have settled down again, FZ tears out some blistering fretwork, followed by Duke taking it home on the synth fadeout.

Ndugu’s “The Once Over” features frenzied Zappaesque passages set against pastoral, minimalistic sections, and an extended percussion-and-acoustic-bass workout. The title track finds Duke singing in a high register – with loads of vocal overdubs – in this sexy r&b slow jam. “Cora Jobege” is another engaging multiple keyboard showcase. “Old Slippers” starts off threatening to deliver more smooth jazz, but quickly left-turns into funk territory, with the welcome appearance of some Duke licks on Hammond organ. Zappa and Airto are credited with involvement on the track, but their contributions are uncharacteristically muted.

The moody instrumental “Theme from the Opera ‘Tzina’” offers some nice synthesizer textures, but ends before the theme has the opportunity to express itself fully. “Yana Aminah” is a lovely marriage of Brazilian styles (Flora Purim’s lovely lead vocal) and Duke’s electric piano textures, shot thorough with alluring percussion. Duke’s solo is mesmerizing.

“Rashid” initially dials back the energy in favor of a deep, sample-worthy groove; Duke excels on countless keyboards, some of which sound like electric guitar. The brief “Statement” starts and ends too quickly to qualify as a tune. 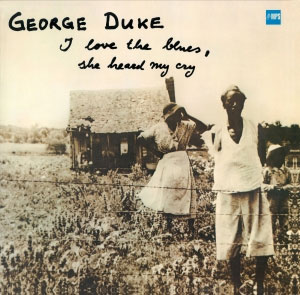 Vol. 4: I Love the Blues, She Heard My Cry
For this 1975 LP (dedicated to the recently deceased Cannonball Adderley) Duke increases both the number of contributing musicians and the energy level. More associates from Frank Zappa’s orbit are present, including bassist Tom Fowler, brother Bruce Fowler on trombone, ace melodic percussionist Ruth Underwood, and Johnny “Guitar” Watson. (Zappa himself doesn’t appear.) Purim and Ndugu are on hand as well. Guitarists Lee Ritenour, Daryl Stuermer, and George Johnson all turn in exiting performances. By this point, it’s likely that some jazz purists in Duke’s fan base were getting discouraged; as a whole, the disc leans more toward funk and rock than anything in Duke’s catalog up to this point. Even when the funk is dialed back – as on the romantic “Sister Serene” – the music feels more assured. Underwood’s marimba work on “That’s What She Said” is never less than thrilling, and Stuermer’s lead guitar dialogues nicely with Duke’s dizzyingly-fast keyboard runs.

The brief “Mashavu” features percussionist Emil Richards and assorted weird space/jungle sounds. The parody “Rokkinrowl” is a funk answer to Jimi Hendrix‘s “EXP.” Ritenour cranks out a convincing, churning Hendrixian guitar wail, while Duke’s lead vocal suggests he’s taking the piss out of both Hendrix’s ghost and the still alive and (somewhat) well Johnny Winter. Some left-field piano breaks near the song’s end are inexplicable but wonderful nonetheless.

“Prepare Yourself” mines Stevie Wonder territory once again, with good results. Byron Miller‘s bass is a highlight, as is Duke’s extended (and heavy on the wah-wah) clavinet solo. “Giant Child Within Us – Ego” begins with avant-classical acoustic piano; gradually other instruments – marimba, violin, strings – join on this ambitious and engaging work; at times it’s reminiscent of sections of Zappa’s Lumpy Gravy. The tune’s second half is more conventional and relentlessly upbeat. “Someday” is smooth r&b pop with Duke on near-falsetto vocal. The disc ends with its title track, a loose blues workout that wastes its first minute with ambient sounds that add nothing. Watson’s guitar work is nice enough in a country blues style, but the entire cut feels like a one-take proposition.

Perhaps the budget for studio time left no funds for a professional sleeve design; I Love the Blues, She Heard My Cry suffers slightly from its dashed-off cover art. 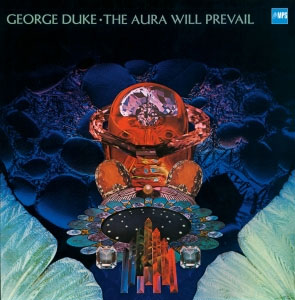 Vol. 5: The Aura Will Prevail
Later in that same year (1975) Duke released The Aura Will Prevail. In contrast to the all-star lineup of the previous disc, this record featured only Duke on keys (including synthesizer bass) plus Ndugu/Chancler on drums and bassist Alphonso “Slim’ Johnson on most tracks (Airto provides percussion on two cuts, and three female vocalists appear on “Malibu”).

The backing on “Dawn” is smooth funk-jazz, but Duke layers it with varied and spacey synth lines. The uptempo “For Love (I Come Your Friend)” goes through multiple movements, all of which are worthwhile, and none of which sounds like the others. The funky intro minimalism of “Foosh” proves once again how the spaces between the notes are important. A manic “Floor De Loop” feels like a funkier Return to Forever with its progressive jazz vibe.

The Latin feel of “Malibu” adds a wholly different dimension to the album, and Duke’s vocal arrangement is a delight. “Fools” is the album’s (seemingly) obligatory r&b slow jam; by George Duke standards, it’s unremarkable, and the lyrics are uncharacteristically weak and cliché.

A pair of Frank Zappa tunes follow; as it happens, they’re among Zappa’s best. “Echidna’s Arf” is a devastatingly complicated piece of music that somehow manages to be appealing; Duke changes up the arrangement – one he knew well from playing it onstage with The Mothers – and a long midsection focuses on electric piano, ring modulator, and synth bass.

The faux-gospel “Uncle Remus” (a Duke/Zappa co-composition) might even be superior to Zappa’s version on Apostrophe; Duke’s piano and Billy Preston-ish organ are breathtaking. The disc closes with the very brief track “The Aura,” a closing theme not unlike the kind of thing Cannonball Adderley did in concert (albeit with more percussion here). 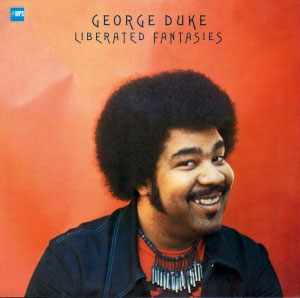 Vol. 6: Liberated Fantasies
This 1976 LP is the last in the new box set, and its release marked the end of George Duke’s association with the German MPS label. Writing in the 21st century on his website, Duke had this to say: “Overall, this is not a great record!” He characterizes some of the tunes as disasters, placing the blame on the demands of r&b radio. For all that, the ingredients for a solid album seem to be in place: many past associates return (Ruth Underwood, Airto, Ndugu and several others), and longtime Zappa associate Napoleon Murphy Brock helps out on vocals. But there is an airless, by-the-numbers rhythm and blues feel to many of the tracks.

“Seeing You” is pop piffle; good enough for commercial radio, but a disappointment coming from someone of Duke’s stature. “Back to Where We Never Left” is solid if slightly faceless funk. “What the…” is thirty seconds of pointless rehash that even Zappa wouldn’t have bothered with. But “Tryin’ & Cryin’” is fascinating; it sounds musically closer to Todd Rundgren than to anything else. “I C’n Hear That” is more instrumental funky r&b, but it’s a marked improvement over “Back to Where We Never Left.”

“After the Love” sounds like a half-baked Brazilian-flavored bid for pop chart domination; it’s pretty enough, but fails to launch. As such it’s merely mood music. “Tzina (excerpts from Act II Scene II)” is related to the tune that appeared on Feel; here it’s a bit more developed, but only a bit. The disc closes with the nearly ten-minute title track; this workout skillfully combines Duke’s Latin musical proclivities with his impressive keyboard chops (the latter of which are in oddly short supply elsewhere on Liberated Fantasies). There’s a slightly distressing disco vibe to the track, but the impressive soloing keeps things on track. A strong finish to an uneven album. 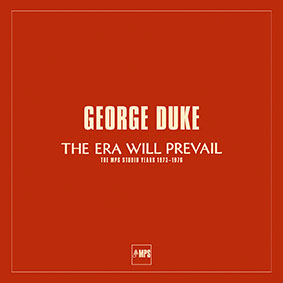 From here, Duke continued his career, finding greater commercial success. Later collaborators included Billy Cobham, and furthered his immersion into pop, jazz, r&b, Brazilian, and other styles. By the 1980s he began his long musical association with bassist Stanley Clarke; I was fortunate enough to see the Clark/Duke Project in concert circa 1982 (the height of their fame); sadly I wasn’t familiar enough with Duke’s 1970s work to have recognized any of it if he had played it. At that point – in my defense, I was only eighteen – I knew him only as “that black guy who played keyboards for Frank Zappa.” With the addition of The Era Will Prevail: The MPS Studio Years 1973-1976 to my vinyl collection, a serious wrong has belatedly been put right.

N.B.: There is another George Duke compilation — released in 2008 — of this same material, called My Soul: The Complete MPS Fusion Recordings. It’s a bit less pricey, but it’s a 4CD set, and as such, the audio is AAD (analog recording, analog mixing, digital mastering). The wonderful set reviewed here is fully analog (AAA). Your turntable — not to mention your ears — will thank you. 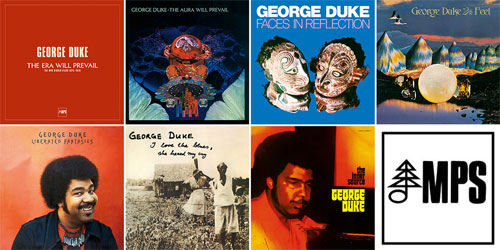