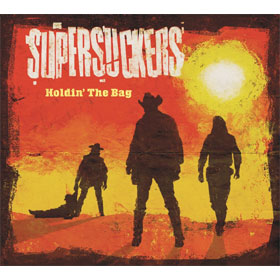 File Next to: Long Ryders, Jason & the Scorchers, Peter Case

If Michael Jackson could hubristically anoint himself King of Pop, it stands to reason that Supersuckers should be allowed to crown themselves the Greatest Rock’n’Roll Band in the World. Though past efforts have found the rowdy trio cranking out hard rock, they’re not a one-dimensional act. As the title track of Holdin’ the Bag illustrates, they can turn out hard-bitten Americana-flavored rock that combines the best of singer/songwriter with the western end of c&w. There’s a boot-scootin’ ambience to the songs, but it’s knowingly grounded in rock’n’roll. And despite real life’s intrusions – bassist/vocalist Eddie Spaghetti is in cancer treatment – the band’s humor is always present; here’s an example: “This beer would taste a whole lot better / if I didn’t have to drink it with you.” And Supersuckers turn in credible modern/mainstream country (albeit with R-rated lyrics) on the chiming “High & Outside.”