DVD Review: Taste — What’s Going On: Live at the Isle of Wight 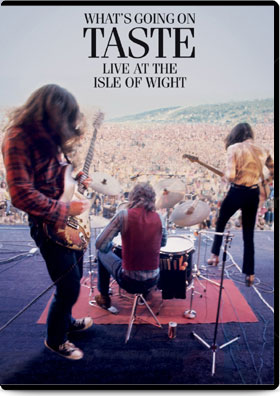 It happens quite rarely: I discover an album or video by a rock artist active decades ago, one who is totally unknown to me. And it’s happened now.

Taste was an Irish power trio, fronted by young guitarist Rory Gallagher. Though the group wasn’t together long – in fact their recording career lasted barely two years – they exerted a powerful influence on many of the era’s top musicians. And their effective swan song was a performance in front of more than a half million fans at the i970 Isle of Wight Festival.

Taste was an oddity: a blues-based trio that quickly and often moved beyond the confines of that musical idiom. Though with his severely battered Stratocaster (presaging Stevie Ray Vaughan) Gallagher was a stunningly expressive guitarist, by the group’s second album, he was playing impressive saxophone parts that showcased his affinity for the way-out jazz explorations of Ornette Coleman. And having relocated from Cork to Belfast, Taste quickly became identified with Northern Ireland, then in the midst of the darkest days of The Troubles.

But Taste somehow transcended the violence and unrest of Derry, and quickly gained the notice of Eric Clapton; the Irish trio would open for Cream, and in fact were on the bill of Cream’s “farewell concert.” Taste went on to tour the USA with Blind Faith, and released a pair of highly-regarded (and well-selling) albums, 1969’s Taste and On the Boards (1970).

But disputes among the trio regarding their management quickly pushed the group to the breaking point. On the eve of the Isle of Wight gig, they made the decision to split. But one would never know that from hearing them on the (abbreviated) audio document of that show, 1971’s Live at the Isle of Wight. All three of them – Gallagher, drummer John Wilson, and bassist Richard “Charlie” McCracken – played as if their lives depended on it.

In contrast to some of the era’s overblown blooze (say, the onstage Cream, for example), Taste displayed a great deal of nuance. Coaxing seemingly infinite sustain from his guitar, Gallagher played with finesse and deep expression, using distortion and volume (and – quite notably – lack of volume) as tools in his sonic arsenal. The interplay between the three musicians borders on telepathy, and there’s a give-and-take more readily identified with a jazz sensibility than lunkheaded ol’ blues-rock.

And it was all captured on film! American director Murray Lerner had come to the Isle of Wight to document a festival that he hoped would be a gritter, more authentic document than the Woodstock film (he’s on records as not liking Woodstock, the event/film). He, too, was new to Taste; never having heard of them, he was instantly blown away and had his crew focus on them for their entire set.

The film never came out, though, until now. But it’s clearly been worth the wait. The cinematography is clear, beautiful, and wholly without artifice. The endless quick-cut aesthetic of today’s ADD-styled music video making is conspicuously absent here; the focus is on the music and musicians.

The wraparound content – interviews with Larry Coryell, Brian May, U2‘s The Edge, Bob Geldof , and Gallagher’s brother– are fascinating, and help provide important context for just how important Taste were/are. The Queen guitarist in particular is especially forthright about Gallagher’s influence on his own style. Geldof is eloquent in his explanation of the Irish pride that Taste engendered. And Coryell – someone who’d know about such things – compares Gallagher’s guitar playing to Jimi Hendrix and avant garde jazz musicians.

Bonus materials on the new DVD include the original concert-only film in 4:3 format, and a brief collection of Taste clips from Beat Club and other sources. What’s Going On: Taste Live at the Isle of Wight will appeal to many audiences: those interested in the festival era; fans of blues-rock; people interested in Ireland’s oft-overlooked contribution to rock and popular music; and those who simply dig some incredible musicianship captured in its raw, unvarnished, live state. For all of those and more, this video is enthusiastically recommended.