A concert scheduled on October 31 gives those in a playful, partying mood an excellent excuse to head out to the show. While the ensuing sold-out crowd at Asheville’s Orange Peel didn’t end up creating a favorable atmosphere for the two opening acts on the bill, headliner Papadosio was the beneficiary of an upbeat and cleverly-costumed room full of concertgoers.

First up was Third Nature. A downtempo act, the group seemed a questionable fit for this night at the Peel. The musicianship – in particular the primary keyboard player – was first-rate, and lead vocalist Lily-Anne Merat (resplendent in a Peter Pan costume, complete with dagger and cap) displayed her impressive singling ability. But the understated vibe of Third Nature’s music – subtle and alluring as it is – simply didn’t go over in the large room. I feel certain they’d be much more successful in a different musical setting.

Second-billed was the seven-person Midnight Snack. Like the other acts on this night’s bill, they’re an Asheville-based group. But like Third Nature, they tour and aren’t very well known locally. The self-described art rock group took the stage with the house lights still up, an unusual approach to say the least. From there they proceeded to do a sound check; that’s even more unusual, as sound checks are rarely done with the audience in the room. Clearly the group was having some difficulties with the back-of-house (monitor) mix; after a few minutes it seemed that the problems had been resolved, and they left the stage. 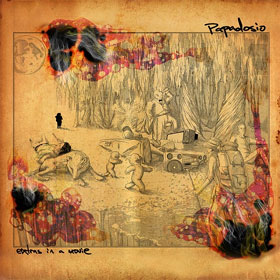 When the house lights were dimmed and the group returned to the stage, it quickly became clear that the problems weren’t resolved; certainly they weren’t to the satisfaction of this concertgoer. For the entire set, the lead vocals were barely audible, and the trumpet player could have been miming, for all we could hear. At first their umbrella-hatted costumes seemed intriguing, but quickly became a distraction, the sole interesting quality of the entire performance. Worse yet, the bass was mixed far too out-front; the result was essentially an instrumental set featuring some of the people onstage moving their mouths but communicating little. After awhile, the female trumpet player seemed to give in to the inevitable, playing her solo parts far away from the (essentially useless) mic. Still worse yet, the group’s music completely failed to engage the audience, which by this point was nearing capacity. Their sole energetic number was a Talking Heads cover, and it marked the only time the audience moved or paid more than passing attention to the band. After a perfunctory set, they announced that they were out of time, and left the stage.

After an unusually long interim – some thirty minutes, during which time the house PA played Rufus & Chaka Khan‘s “Tell Me Something Good” twice (at least people danced) – Papadosio came out. An impressive light show with a backdrop that incorporated prepared and live images meshed nicely with the group’s music. The group was mischievously attired in Muppet-themed costumes, and when they spoke to the audience, they often did so in character. By this point, the capacity crowd was in a festive mood. And people were more than a little restless, thanks at least in part to the relatively low-energy sets they had heard for the previous hour and a half or so. Papadosio mixed older material in with numbers from their latest, Extras in a Movie. The musical highlight came early – at the very beginning, in fact – with a top-notch performance of “Epiphany,” the strongest track on the new disc. The song played to Papadosio’s strengths: finely textured arrangement, varied tempos, and upbeat singing that all but forced the audience to “ahh” along.

Other numbers showed the group’s versatility, but also served to showcase the EDM side of Papadosio’s sound, a quality which left this listener unimpressed; there’s simply an inescapable robotic, faceless quality to electronic dance music. It may be fine for DJs and such, but when a live band with real musicians and instruments engages in EDM, it simply doesn’t click. It didn’t help that the sound system was being pushed to its absolute maximum; even with earplugs, I found Papadosio’s mix painfully – and I use that word advisedly – loud. The crowd as a whole definitely dug it, but I can’t help but think that they would have reacted just as well to the house PA cranking out uptempo dance-oriented music from a pre-recorded source.

In sum, the evening showcased (1) a good band in the wrong setting, (2) a band with – at least this night – serious problems in front of a mostly disinterested audience, and (3) an often excellent group playing far, far too loudly. Having spun Extras in a Movie a few times before the show, and having found much to recommend in Papadosio’s back catalog, I had shown up at the Orange Peel hoping to come away with an experience about which I could enthuse. Sadly, that wasn’t the case. Verdict: good-not-great.