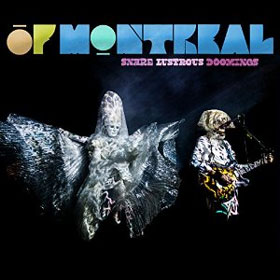 One of the most commercially successful exponents of the Athens GA-based Elephant 6 Collective, of Montreal has a well-deserved reputation for powerful live performances. Kevin Barnes‘ group is also one of the most prolific acts out of the collective, with thirteen studio albums (not to mention numerous compilations, EPs and singles). But Snare Lustrous Doomings is the group’s first live set. Here, Barnes and company build upon the psychedelic, art-pop sensibility that’s a hallmark of the collective, imbuing the songs with a rocking, guitar-centric approach; Barnes’ voice is reminiscent of Television‘s Tom Verlaine, and the band charges ahead like vintage Buzzcocks with a bit of subtlety mixed in for good measure. The energy of live performance is well captured. And of Montreal wear their popsike influences on their sleeves with a rocked-up reading of Emitt Rhodes‘ classic “Time Will Show the Wiser.”