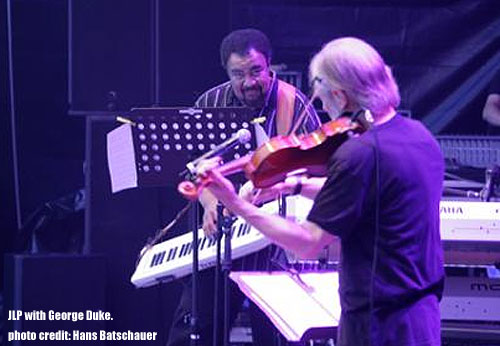 When Jon Anderson and Jean-Luc Ponty first got together in 2014 in Aspen, Colorado, they didn’t know what wold come out of their collaboration. “We brought some songs, and we spent three weeks rehearsing. We did the show, and then it was only after we had recorded it that the music grew on us. We realized its potential. Because originally, we though we’d just record the show, and it would be a regular live album. Once we heard it, they rhythm section played so well, and the sound was very good. What happened was that they had installed a brand new recording setup at the Wheeler Opera House. In fact that was one of the reasons they had invited us to rehearse there, and do a show that they would record; they wanted to test their equipment.”

Ponty characterizes the results of that recording – The Anderson Ponty Band‘s Better Late Than Never – as “A top quality production. And when we heard that, we kept most of the live performances for the album. Most of Jon’s vocals, all of my solo improvisations. But then there was a Yes song on which I forgot to play! Little details like that,” he laughs. “So we thought it would be really too bad to let it go, and that’s when we decided to do a hybrid version in which we would finish up in the studio what we had started live onstage.” Then the finished product would “sound like a top studio album.”

The exacting and focused soundboard recordings captured very little in the way of audience applause, so the resulting recording has the energy of live performance coupled with the quality of a studio session. “There is only one song, ‘I See You Messenger,’ that didn’t work live,” says Ponty. “So I did a new arrangement [in the studio]. It was a writing collaboration between Jon, his son, and his nephew, and I did the new arrangement. But for all the rest, we wanted to keep the raw energy, especially of our rhythm section.” 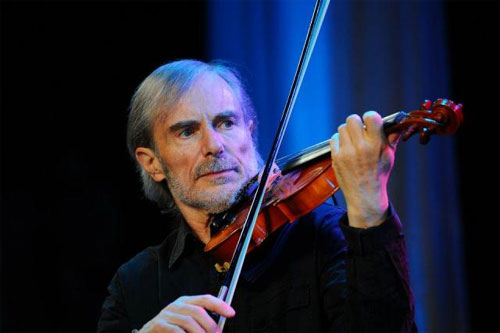 Once the Aspen collaboration was completed, everyone returned to their homes. Work continued on the album, but at a slower pace than anticipated. Ponty explains, “we live in different parts of the world, communicating by internet, and we were slowly coming up with additional ideas. Also, when we started, we had Jamie Dunlap on guitar, and he was supposed to oversee the whole technical production of the recording. But after two months – he’s so popular as a composer; he works on the TV show South Park – he just couldn’t get to it. So we lost a couple of months. Then I took over: we decided that I would be responsible for the audio production, and John would be in charge of the film, the DVD. But we lost some time, and we wanted to take our time to really do it well.” Acknowledging criticism from some of the project’s Kickstarter backers, he says, “We did not expect that it would take so much time. Even though it made some backers angry, we thought that the most important thing was the finished result.”

The band is currently on tour across the USA, with dates running from October 23 through November 21. “we are planning to tour more next year,” Ponty says. “First we want to do this tour, and see how it goes. Already there is demand from some other parts of the world – Asia, Europe – so the plan indeed is to see how we can fit a return to the US in 2016 during the summertime.”

Not surprisingly, Ponty is involved in other projects as well. One that he’s quite happy to discuss is D-Stringz, a trio featuring the virtuoso violinist plus Stanley Clarke on upright bass and Gypsy guitarist Bireli Lagrene. “It happened about the same time” as the Anderson Ponty Band sessions, Ponty says. “We recorded it last year, August 2014. I had a long musical relationship with Stanley Clarke. We had done a few different trio collaborations: starting with Al Di Meola, and one with Béla Fleck. But we always had in mind this Gypsy French guitarist Lagrene, who is really a genius in that style, taking from Django Reinhardt. He’s able to play modern jazz as well.” 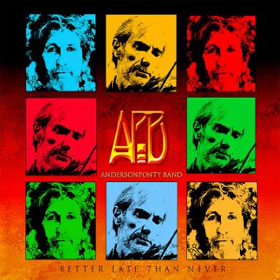 Ponty explains how the project came about. “I had a show in 2012. I had been playing with Return to Forever, with Chick Corea, and I had a concert in Paris to celebrate my fiftieth year playing. I played with a symphony orchestra for the first half, and then I had flown Stanley to Paris to do the second half of the show with me. We played with the guitarist Bireli Lagrene for twenty minutes, and then we did other formats. We loved that; it was the highlight of the evening. And so that’s how the idea of doing a whole album came about. It was very spontaneous; a very different approach than progressive rock, for sure. We got together two days before the recording, made a list of what we could play together, and then did the whole album in four days in the studio. We even decided to play some jazz standards – on the spot – while we were in the studio. I’m very happy with it, and it’s very different than what I am doing with Jon Anderson. It’s totally acoustic; I play acoustic violin.” D-Stringz was released November 6.

Looking back several decades, Ponty’s string of fusion albums from the 1970s (on Atlantic Records) are massively influential. More than most any other musician, Jean-Luc Ponty bridged jazz and rock in a way that’s accessible; his influence can be heard today in the music of groups that have little or nothing to do with jazz. “It’s true that in the 90s,” Ponty says, “when I started playing in former Eastern bloc countries – Poland, the Czech Republic, Romania, even Russia – everywhere, young generations of musicians said that they were very inspired by what I did on my albums, and with Zappa, Weather Report, and so on.”

After a period of several years in which he seemed to scale back his musical activities, in 2015 and beyond, Jean-Luc Ponty is as busy as he’s ever been. He laughs when it’s suggested that he’s experiencing a second wind. “I hope so! I’m just a lucky guy. Of course I had to bring some new ideas that caught people’s attention in the 70s; that’s how I started. But you never know; it’s a lottery to be a successful musician. But I think that in life there is more than that; there is a question of destiny. I really believe that. It’s incredible that at my age I’m still busy. I feel so lucky to still be alive so that forty years after I was first asked to play with Return to Forever, I could still do it! And now with Jon Anderson, and with D-Stringz! My thinking is that I never personally sought, solicited these gigs. With Zappa, McLaughlin…to this day. They all came to me.” He repeats for emphasis, “I’m a lucky guy. I can still play in tune, and everything functions well. As long as it’s like that,” he says, “I will keep playing.”

Asked if he has musical plans beyond what we’ve already discussed, Ponty has a ready answer: No. “At my age – I’ll be 74 next year – I don’t make plans. It’s fine if I have nothing else coming in. If I can retire, I’m okay; I can enjoy life with my wife, my family, my grandchildren. I’m not really planning to do that much. But,” he pauses for a moment and adds, “I have a few ideas…”