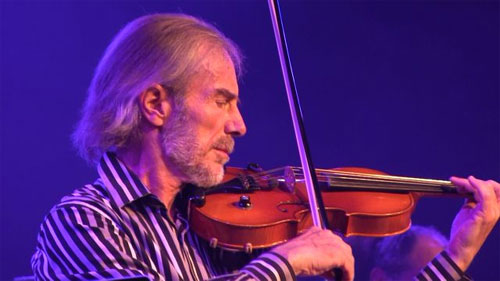 Jean-Luc Ponty and Jon Anderson have long and distinguished careers in music. Anderson is known first and foremost as founder and longtime member of Yes, one of progressive rock’s most celebrated bands. And for many years – even before he parted ways with his longtime group – Anderson has worked outside of Yes on a number of solo and collaborative musical endeavors. His work with Vangelis Papathanassiou (the Chariots of Fire composer, and also a key member of late 60s Greek prog group Aphrodite’s Child) is Anderson’s most high-profile non-Yes work.

Ponty’s career is even more varied: a virtuoso violinist born in Avranches, France, he was one of the first jazz artists to expand his career beyond that idiom. He’s played progressive rock, gypsy jazz (sometimes with his hero Stéphane Grappelli), fusion, world music and much more. Ponty plugged in his violin and added his unique skills to Frank Zappa‘s music; he was an important part of Mahavishnu Orchestra. His credits are extensive and formidable, to say the least.

But even though they met many years ago, Anderson and Ponty had never collaborated on a musical project. Until now, that is. The Anderson-Ponty Band formed last year and has just released Better Late Than Never, an album of new material and re-arranged readings of material from both men’s back catalog.

Ponty has an amply demonstrated facility for switching effortlessly between musical styles. He applies his signature sound to different projects. “In one way, it’s all music,” he says. “When I was younger, I approached whatever I was doing the same way. I tried to fit my jazz and classical playing [into whatever I was doing]. But with the years, since I’ve been adding up experiences, I’m a lot more able to adapt – to understand – what really the music is about. In collaboration, I try to fit the best, but still retaining my own style. Because I’ve never wanted to be a chameleon.” 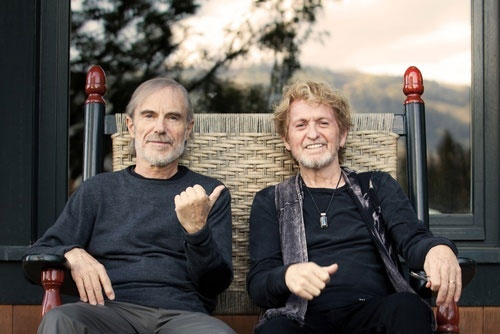 That’s not always easy. “Sometimes it’s a challenge,” Ponty admits with a chuckle. “But with Jon Anderson, doing prog rock/pop, I have to be careful not to step in front of him! I listen to what he sings, and weave around that.” The result is a dialogue of sorts, a musical conversation between Anderson’s high and expressive voice, and Ponty’s equally expressive violin.

A collaborative approach was applied to The Anderson Ponty Band’s reworking of older material. “Take ‘Mirage,’ one of my old tunes,” Ponty offers. “Jon provides a new melody of his own. It fits so well; when I heard that, it convinced me that we had to do a project together. He really feels the essence of my music.”

“And,” he continues, “I do the same. Of course there are differences, but there is a relationship – a common element – between progressive rock and jazz-rock. The thing that we [prog and fusion artists] did in the 1970s was to experiment with different structures. Not to stick with the traditional short song formats. The idea came from symphonies, from classical music: just go on a long adventure.”

“The difference,” Ponty points out, “is that in jazz we push our brains to come out with the most inventive way to find new melodies, chords, and rhythms.”

For the new tunes on Better Late Than Never, the pair collaborated, too. Ponty says, “On ‘Soul Eternal,’ for instance, Jon wrote the melody, and I came up with the bass line. I also brought to it a West African groove; the groove is called macosa, from Cameroon. I first heard it when I did a musical project in the 90s, and it fit very well.”

Widely-known Yes songs including “Roundabout” and “Owner of a Lonely Heart” get recast by The Anderson Ponty band as well. The group makes the songs their own, while keeping those qualities that made the songs popular to begin with. Several members of the band are veterans of Ponty’s own group. “The reason it works – and why I chose these musicians in particular – is that I knew that they were the best ones to adapt, to play this music as well. They grew up listening to prog and jazz, and they can play all kinds of music. So they were very excited to do this collaboration, and they gave their best to serve Jon’s ideas. And that was essential; otherwise, it wouldn’t work.”

Ponty continues. “When we got to do the classics by Yes, songs co-written by Jon, we wanted to respect each piece; we didn’t just want to grab it and make it a jam. But we wanted to bring our own rhythm feel to it. And Jon insisted that I play a lot more! At the beginning, I was a little shy, maybe. But he insisted. So on the introduction of ‘Owner of a Lonely Heart,’ it has a lot more of my sound. And that makes it different than the original recording. Which it should be,” he adds. “because it’s silly to just reproduce a hit. You never achieve something as good as the original.” 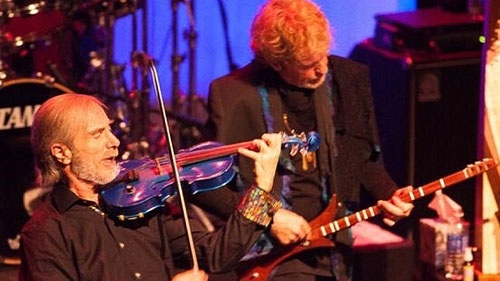 The pair settled easily on a working method for developing the new arrangements. “If we were doing a piece by Jon, he would be the one to really direct the arrangement, the band, the ideas,” Ponty says. “When it’s my composition, it would be me. The one who is responsible for a composition would know best what to achieve with it. And of course everyone gives his input; we exchange ideas.”

The Anderson-Ponty Band launched a successful Kickstarter crowd funding initiative to create Better Late Than Never. As is often the case with projects of this scope, the resulting album – which includes a DVD and an audio CD – took longer than planned to reach its release date. Did that delay give the album its title? “No, no,” Ponty laughs. But he readily admits, “It could have been.” The title refers instead to the way in which the project began.

“I crossed paths with Jon in the 70s,” Ponty recalls. “1974, exactly. I was playing in the Mahavishnu Orchestra with John McLaughlin. We did two shows in Texas [on a bill] with Yes. That was the first time Jon and I met. And I loved their music for its frame and structure. We crossed paths again in the 80s in Los Angeles, when we were both with the same label, Atlantic Records. I was coming out of a meeting, and he was going in, and we talked for five minutes. He said he loved my playing, and we should do a project together some time. I said, ‘Yeah!’ because I loved his singing and songwriting, too.”

But both men were quite busy in those days, so nothing happened. “We went our separate ways for another thirty years,” Ponty laughs. When they finally met up again around 2012, they again discussed the prospect of working together, more seriously this time. “He’s very fast, creative and spontaneous,” says Ponty. “So after talking about it, Jon went into his home studio and started improvising melodies and lyrics – on the spot, just like that – on my classics. He sent me MP3 files of ‘Mirage’ and ‘One in the Rhythms of Hope’ and when I heard them, I said, ‘Oh my god! It works so well with my music! We should have done that years ago!’ To which Jon replied, ‘Well, Better late than never!’ So we had the title of the album even before we recorded it.”