Only in America: The Lloyd Price Interview, Part 1

Rock and Roll Hall of Famer Lloyd Price is a pop music legend. The Kenner, Louisiana native scored an impressive string of major hits, beginning with 1952’s “Lawdy Miss Clawdy” (#1 r&b), and continuing to rack up nearly thirty singles in the top 100 of U.S. pop and/or rhythm and blues charts. Several of his songs have gone on to become standards, including “Just Because” and “Personality.” Price toured successfully in support of those singles, and even after the hits stopped coming – his last charting single was in the mid 1970s – he remained a popular concert draw. 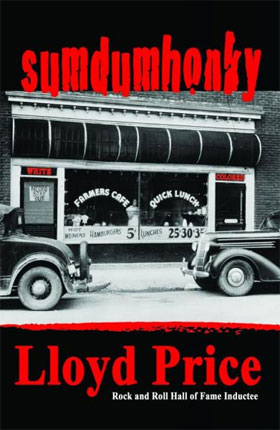 Today at age 82, he’s still a vital, active man: he has a number of successful businesses, and recently published his second book, Sumdumhonky. A frank and often harrowing look back at Price’s experiences growing up black in the United States, Sumdumhonky isn’t a comfortable read; Price the author takes readers down some dark memory lanes as he recounts stinging examples of racism and bigotry. Sumdumhonky is an important book, even though at times it may make readers squirm.

Some readers might come away from reading the book suspecting that Price is an angry man. Not so. “I do see progress,” he tells me. “It’s nowhere near what it was when I was a kid in Louisiana. That was a long time ago. There’s progress: there’s a black guy in the White House!”

“What I’m mostly talking about,” he explains, “is how and why progress was made. It was made with music. Music brought all of the black and white teenagers together, and now those people are the grandparents. It was that DNA…not just in America, but worldwide. That music has been able to bring people together the world over.” And Price takes justifiable pride in being a part of that phenomenon.

As Price recounts in the pages of Sumdumhonky, his early performances in the American south were eye-opening with regard to racial discrimination. “The first place where I really recognized it was in Raleigh, North Carolina,” he recalls, “back in 1953, when I first went on the road. I saw that it was really, really against the law for young black and white kids to be together. The policemen stopped the dance! Because the promoter was letting the white kids come in as spectators. If you were a white kid, you could come into a black dance, but only as a spectator.” White kids couldn’t participate in the dance; they had to remain seated in the balcony. And it was the same for African American kids at white dances.

The history of music is full of accounts in which musicians got screwed over by labels, by management, by promoters. And African Americans suffered disproportionately in these kinds of situations. Here, too, Price believes that real progress has been made, and he’s certain where at least some of the credit belongs. “What made it better – believe it or not – was the hip hop community. [Initially], these kids had such a gangsta mode, they could not get a major label to sign them. But then this guy out in L.A., Suge Knight, started taking in the gangsta hip hop acts. They started getting a little bit more respectable, and then bigger companies – the majors – started to distribute the independent recordings. And then the artists started getting paid a little better.” The acts’ costs were low, Price notes, because “they were making their records in their house, on their iPad.”

“The only way that progress is made,” Price believes, “is through someone else’s experience. And that’s what Sumdumhonky is about: how it was, and how it is today.” And in the pages of Price’s book, reader learn that things weren’t exactly rosy on Price’s ancestral continent. “It was a major disappointment to me when I got to Africa; I saw how Africans treated each other. It absolutely blew my mind! The world over, the big ones eat up the little ones. And it didn’t have anything to do with color or political [affiliation]; somebody’s gotta be over somebody else.”

In Sumdumhonky, Price tells the story of how he ended up fighting in Korea. “I got drafted because I was having so many hits, and the songs were bringing black and white kids together.” The U.S. War Department’s Sole Survivor Policy (created after the deaths of the celebrated “fighting Sullivan brothers” in 1942) should have precluded Price being drafted, as he already had five brothers serving in the military. As Price tells it, the chairman of the Senate Committee on Armed Services, Senator Richard B. Russell of Georgia – a vocal opponent of the civil rights movement – decided he’d make an example of the popular singer, and instructed the Draft Board to call up Price for military service. Lloyd Price served with honor, but some of his stories from his days in Korea – chronicled in Sumdumhonky – will shock even modern-day readers.