In 2015, Omnivore Recordings has reissued three albums from Peter Frampton. They’re each quite different from one another, but since they’ve been put into the market at once, that’s how I’ll review them here. — bk 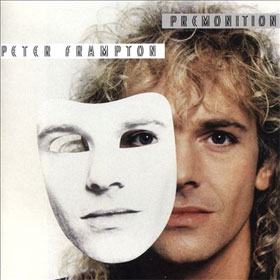 Premonition (1986)
Though nearly a decade had passed since releasing the blockbuster live album Frampton Comes Alive, Peter Frampton’s ability to write a solid, hooky tune had diminished little if at all. And his guitar playing was as expressive and impressive as ever. What had changed, however, was fashion. In the same way that David Bowie made a left-turn into the mega-selling but artistically barren Let’s Dance (1983), Frampton made concessions to the prevailing sounds of the mid 1980s.

And if you’ve read most anything on this blog before, you’ll know that – from my perspective – that’s rarely a good thing. Peter Frampton’s 1985 Premonition is, then, that curious creature: good songs rendered horribly dated by the album’s prevalence of digital synthesizers, stiff percussion that feels (and probably is) ruled by the infernal click track. As the guitarist relates in the Omnivore reissue’s liner note essay, “I was listening a little too much to outside influences telling me what I should be doing.”

If you can listen past the MTV-era production values, if you can tune out the gunshot snare drums, if you can ignore the dialed-in synthesizer textures that sound impossibly cliché in 2015, if you can forgive arrangements and instrumentation that scrub away character and render this talented artist nearly faceless – or if you actually enjoy all that shit – there’s some fine music to be found within Premonition. Otherwise, not so much. 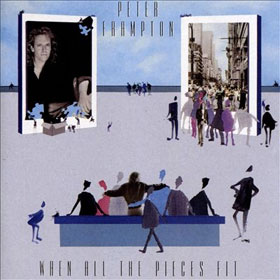 When All the Pieces Fit (1989)
Three years after Premonition and now recording for a new label, Frampton released this disc. The Omnivore liner notes (again by Scott Schinder) paint the disc as a return to form, arguing that Frampton had cast off the dated production non-aesthetics of that earlier disc. But the sonic realities – at least to these ears – don’t fully bear out that assertion. “More Ways Than One” is a solid tune, but it sounds more than anything else like Arc of a Diver-era Steve Winwood. That characteristic is borne out when one learns that among Frampton’s collaborators were “song doctors” Danny Wilde and Will Jennings (the latter was heavily involved in 1980’s Arc of a Diver).

True, Frampton’s guitar playing is much more prominent in the mix, but the era’s “big guitar” sound is all over the record. Luckily, said big guitars aren’t as annoying as gunshot snares, but they’re dated all the same. And oh my, are those synth patches way past their sell-by date. Again, the songs are good, and Frampton’s playing and singing are reliably solid. When All the Pieces Fit is a vast improvement over Premonition, but it’s short of classic Frampton. But when Frampton sings “All the music that I haven’t made / keeps my soul alive,” you figure there’s hope. 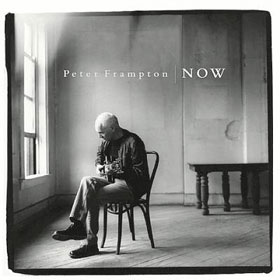 Now (2003)
Depicted on the album cover seated and shorn of his trademark curly locks, Frampton’s clearly gone through some changes since When All the Pieces Fit was released fourteen years earlier. Frampton had released but one album in the interim, a self-titled 1994 disc that is not part of Omnivore Recordings’ 2015 reissue program. 1994’s Peter Frampton was released on Sony International, and by the time of Now (Frampton’s twelfth studio album), the guitarist was recording for small indie label 33rd Street Records. There’s an immediacy, an intimacy to the tracks on Now that will erase any bad taste those earlier albums may have left with listeners. Keyboards are indeed present, but they’re dialed way back, placed in a context more befitting an album by a guitar player. And as often as not, those keyboards are piano, electric piano, and organ; synths are most assuredly not a defining feature of Now.

Frampton Comes Alive sideman Bob Mayo makes a welcome return after a long absence, and helps Frampton make an unassuming record that feels – dare I say it – timeless. Some chorused guitar parts crop up in the bluesy “Flying Without Wings,” but they’re used to good effect. There are a lot of understated, acoustic bits on the album, and they all work. Everything about Now feels genuine and organic; perhaps not being expected to create a blockbuster gave Frampton the freedom to make an album that reflected his artistic impulses. The atmospheric instrumental “Greens” is a disc highlight. The snaky “I’m Back” delivers on its title.

And the guitar heroics on his reading of George Harrison‘s “While My Guitar Gently Weeps” rival the kind of thing one gets from Jeff Beck on his better days. Yes, the arrangement overall is nearly a replication of The Beatles‘ version, but it still quite wonderful. (And as such, all is forgiven for your involvement in that Sgt. Pepper film travesty, Peter.) By any measure, it’s a success, and pointed the way toward his subsequent well-received material.