Looking back on the 1960s, it’s easy to understand why certain countries didn’t get whipped up in the era’s rock and pop revolution quite to the extent that we did in the USA and Great Britain. Spain, for example, was still under the fascist dictatorship of Generalissimo Francisco Franco, and would remain so until the middle of the following decade. And there was always the issue of a language barrier (though British groups like The Who were massively popular throughout Scandinavia). 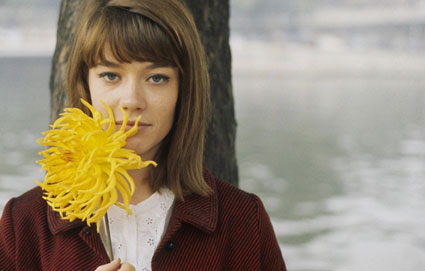 No country in Western Europe had a more insular pop culture scene in those days than France. Even The Beatles got a (relatively) tepid response when they played at the Paris Olympia in January 1964, a time when they were the biggest thing ever a mere 200 miles away in London. The French marketplace always preferred their pop stars home grown, so much that they minted their own ersatz Elvis Presley, Johnny Hallyday. The acts who succeeded in France were ones with a distinctively French sensibility, like Serge Gainsbourg. And the biggest chanteuse in French pop culture was Françoise Hardy.

Her magazine-model good looks coupled with a somewhat shy persona that suggested a deep, inward-looking character. Hardy was a sensation not only on the strength of her music, but because she wrote her own songs. It’s worth remembering that recording acts coming up with their own material were virtually unheard of until The Beatles started doing it: Frank Sinatra wasn’t a songwriter, nor was Elvis (some suspect co-credits notwithstanding), and even The Rolling Stones were primarily a cover band until 1966’s Aftermath, their fourth album.

In those days in France, the format du jour (sorry!) or perhaps de rigueur (apologies again!) was the Super 45, a seven-inch disc known pretty much elsewhere as an EP (extended play). Hardy released a long string of these, each with its own color picture sleeve. And as was – or became – standard practice, every time she accumulated three of these Super 45s, French label Vogue would compile and release a long-playing twelve-inch record, eponymously titled. Five of these albums are being reissued by Light in the Attic. Today and over the next two days, I’ll take a look at these discs. 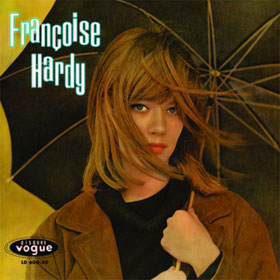 Tous Les Garçons et les Filles (aka Françoise Hardy)
When Hardy released her debut album in November 1962, she was a couple months shy of her nineteenth birthday. For the disc’s twelve tracks, Hardy penned the lyrics (and co-composed the music) for all but two. Though the arrangements for most of the songs featured orchestral backing (Roger Samyn and His Orchestra), the music was spare and straightforward, a sort of polite, pop-leaning version of folk.

But not American folk: from its very start, Hardy’s music displayed the influence of French chanson, the Gallic equivalent of English music hall. Hardy sang completely in her native language, and the music followed the cadences of French (as opposed to shoehorning lyrics into a song written in English, the practice followed by most every other non-English-speaking pop act of the era).

Hardy’s deadpan delivery has a cool, aloof air about it, an approach that one suspects influenced German vocalist Nico as she began her own recording career later in the decade.

Some of the music on the record has the character of café jazz; the spare “Ça a raté” (“It Missed”) has little going on beyond Hardy’s vocal, a bit of woodblock percussion, and hollow-body electric guitar. The minimalistic approach of this and the other cuts on Tous Les Garçons et les Filles are effective in their simplicity, placing Hardy’s voice front and center.

“Oh oh chéri” (“Uh oh”), the record’s sole cover (“Le temps de l’amour” was written for Hardy) has a vaguely country-and-western feel, filtered through French sensibility. “Le temps de l’amour” has hints of surf-n-spy textures, with its reverberated guitar and out-front electric bass; it’s representative of the sort of music one of its authors, Jacques Dutronc, would make once he scored a record deal of his own in 1966. (Long a pair, Hardy and Dutronc legally married in 1981.) “Le temps” is as close as the record ever comes to anglophone ideas about rock ‘n’ roll. In fact, the arrangement and instrumentation on the disc sounds to American ears like nothing so much as the incidental music on the United Artists soundtrack LP for A Hard Day’s Night.

“On se plaît” (“It Delights”) has a stiff, clip-clop arrangement that once again harkens back to chanson/music hall traditions. The bouncy “”Il est parti un jour” (“He Left One Day”) puts a good deal more echo on Hardy’s voice, and uses a more ambitious arrangement that changes tempo and key, and gives the solo instrumentals more prominence. Jacques Wolfsohn‘s production on the album is crystalline, and the recording is either monaural or (very unimaginative) stereo, which seems about right for an early 1960s recording.