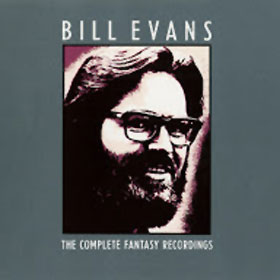 Bill Evans was a singular figure in the world of music, and even more so within the context of the jazz idiom. His music could never quite be described as inviting; most all of his piano compositions and recordings have an insular quality. Listening to Evans, a listener might even experience a feeling of unease, as in, “I’m uncomfortable being allowed to hear such intimate, private feelings being expressed.” And of course Evans did so instrumentally, always (except when working with Tony Bennett) eschewing vocals or lyrics.

Yet his songs always felt as though they were about something. And that something was often melancholy, always contemplative. Evans’ approach was quiet: he wasn’t really an exuberant, uptempo, pop-leaning player like Vince Guaraldi; though Evans’ music was extremely sophisticated, it never had the somewhat scholarly, erudite air of Dave Brubeck‘s work. And though he worked with what musicologists call note clusters, he was rarely as dissonant as Thelonious Monk (and when he was, Evans somehow managed not to sound like it).

What he was, most always, was superb. His recording career began in the mid 1950s, and he was a key player in some of the most important sessions in jazz history. Evans’ piano on Miles Davis‘ seminal Kind of Blue (1959) launched him into stardom (or at least the jazz version of stardom).

After stints as a bandleader/soloist recording for Riverside, Milestone and Verve (and scattered releases for other labels), Evans signed with Fantasy in 1973. He remained with the label until accepting (according to his manager/producer Helen Keane) a better offer from Warner Brothers in the late 1970s. But while at Fantasy, he recorded nine albums (three additional records of Fantasy-era Evans material would be released posthumously). 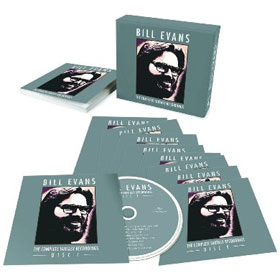 The content of those twelve albums’ worth of music was compiled into a 1989 box set titled The Complete Fantasy Recordings. 98 tracks from eleven sessions made up the box set, originally issued in an LP-sized box (that’s how they did things in the relatively early days of compact discs). The set was reissued in 1997, and now again in 2015. This latest reissue follows the practice employed by Concord Music Group, owner/administrators of several jazz catalogs (Fantasy, Riverside, and Stax, to name but three). The latest reissue is in a sturdy CD- sized box, with individual CDs not in jewelcases, but instead in cardboard mini-LP styled sleeves. The accompanying booklet has been downsized to fit as well, but the text is very readable.

As was standard practice, the output from Evans’ original sessions didn’t correspond directly to albums, so the three posthumous records – the anagram-titled Re: Person I Knew (1981), Eloquence (1982) and 1983’s From the 70s – are all odds-and-sods compilations of leftovers and outtakes. The Complete Fantasy Recordings places all of those tracks back into their original context, whether live onstage or in the studio.

One characteristic of Bill Evans’ Fantasy era output is highlighted in the box set’s Title Index: he often returned to earlier works. True, some of the repeats in this set are live readings rather than studio takes, but it’s nonetheless remarkable that just under half of the box set is made up of numbers that appear at least twice (and sometimes more).

What’s equally remarkable is the way that – seemingly at will – Evans could either play the tunes again virtually note-for-note, or render them in remarkably different ways. The liner notes penned by Gene Lees – an absolutely essential component of the set – make the point that in one session, Evans cut multiple versions of a tune, and the duration of each was were within two seconds of every other.

The deeply emotional quality of Evans’ piano playing is amply demonstrated on these nine discs; his quiet approach seems to say to the listener, “I’m here if you care to listen. If you don’t, that’s fine, too.” But clearly the rewards of the latter make his music – and this box set – simply irresistible.