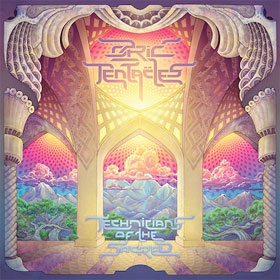 Ozric Tentacles is that rare group that appeals to fans of trance/rave, techno, jam, psychedelic, and space/progressive rock. Founded in Somerset, England – they currently make their home in Colorado – the festival favorites brought their music indoors to Asheville’s Altamont Theatre on Thursday, October 8.

The Ozrics (as they’re known among fans) have been together for thirty years, and they’ve released a new album nearly every year. And though they have a distribution deal with Snapper Music, they’ve never signed with a record label. “I tried getting a record deal early on,” says founding guitarist Ed Wynne, “and they really didn’t like [our music] at all.” He shopped the band’s demo recordings to several label representatives. “The third guy put it on, heard the intro, and started shaking his head slowly. He walked up to the machine, switched it off, and said, ‘Go back to the Stonehenge Festival.’ I took his advice, and it was the best move I ever made.”

Brandi Wynne, Ed’s wife and the group’s longtime bassist, adds, “We did try going with an almost-proper record company. But they really had a lot of input about what they wanted the album to sound like, and what they wanted our cover to look like.” Brandi adds with a smile, “We don’t really speak much now.” And even though it’s proven a viable method for countless bands, The Ozrics have never taken advantage of crowd funding. “I just can’t do it,” Brandi admits. “It just feels so weird.” Instead, the group resolutely charts their own path, one that’s underground by most commercial measures. But along the way they’ve sold over a million albums. 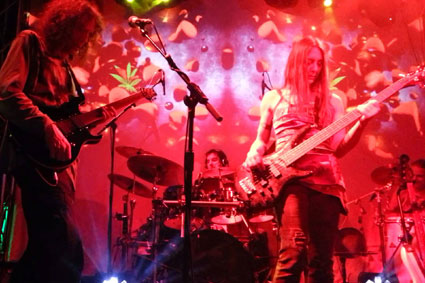 More than two dozen musicians have come and gone from Ozric Tentacles; the current lineup is by far the group’s most stable and long-lasting. “We try to keep everyone happy,” says Brandi. Their relocation to the USA about seven years ago may have played a role in that happiness. Though they enjoyed life and work in Somerset, “It just wouldn’t stop raining,” Ed says. He describes a situation common to British music festivals: “When you go to a festival and you see emergency vehicles with rubber boats on top, you think, ‘Well, let’s turn ’round and go the other way!’” Brandi adds, “I’ve been to the Glastonbury Festival many times. And I’ve never had a dry one.” At the group’s last performance there, Ed Wynne lost a boot “down a muddy hole” on the first day. “That was not nice. One foot was wet the whole time.”

2012 was the start of a difficult period for the band. First, wildfires were plaguing Colorado. “The house and studio burned down,” Brandi says. “We lost everything: all our recordings, all our hardware. We had been on tour; our van was already full with gear. We rushed home and grabbed a couple of things, including the cat, and then we had to go.” And then three weeks later, Ed Wynne landed in the hospital, suffering from a burst appendix. “We spent a year dealing with all kinds of craziness there,” Brandi says. 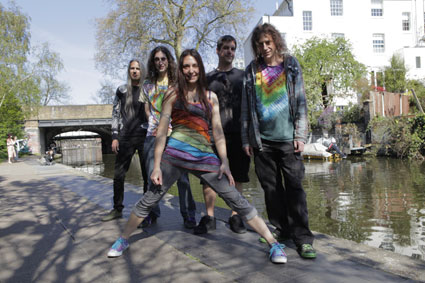 Once everything settled down, the band returned to music. Their latest album, Technicians of the Sacred, is the group’s first release since 2011’s Paper Monkeys. It’s being hailed in progressive quarters as a return to form, and the group’s strongest work in decades. Ed Wynne doesn’t believe that the character of Ozric Tentacles’ music – strong and throbbing bass lines layered with synthesizer textures and long (but not meandering) guitar solos – has changed very much since Erpsongs, their 1986 cassette-only debut. “Ahh,” he adds, “But the quality and the technology has got better. The early stuff was done on four-track [tape], and now they’re done on computer, obviously.” But the music – always instrumental – has remained remarkably consistent. “Inside my head,” Ed says, “it hasn’t really changed. I just have more toys to play with now.”

Wynne agrees when I suggest that his music bears some sonic similarities to the 1970s fusion work of French electric violinist Jean Luc Ponty. “I suspect he’s happy while he’s making his music. And that’s what I listen for in music: the joy that’s behind creating it.”

An edited version of this feature appeared previously in the pages of Mountain Xpress.