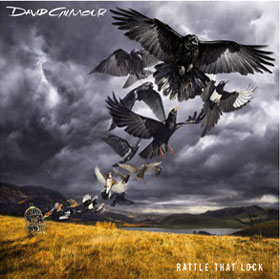 File Next to: Pink Floyd, The Orb

One of the knocks – fair or not – on Pink Floyd‘s pair of post-Roger Waters albums (1987’s A Momentary Lapse of Reason and 1994’s The Division Bell) is that leader David Gilmour tried too hard to make them sound like the group’s classic-era material (Obscured by Clouds through The Dark Side of the Moon). The posthumous release (2014’s The Endless River) has clear sonic similarities with the group’s early ’70s material, too. But on his solo studio albums – a mere four since 1978 – Gilmour has always managed to pull off a daunting feat: largely refusing to ape the Floyd sound while focusing on the melodicism that has always been a trademark of his work, solo or otherwise. On Rattle That Lock, Gilmour pushes the boundaries a bit farther: the delightful cocktail-jazz interlude on “Dancing Right in Front of Me” – and the jazzy entirety of “The Girl in the Yellow Dress” have little precedent in his work (note that the 1971 Floyd obscurity “Biding My Time” is a Waters tune). Gilmour has long since recognized that lyric writing is not his strongest suit; for those, he’s long relied upon wife Polly Samson, and here she provides reflective and suitably melancholy words for Gilmour’s tunes. And for those who insist upon some Pink Floyd-style rocking out, “Today” should fit that bill nicely; it sounds slightly out of place on this disc, but would fit nicely on The Wall. Gilmour has always been more about texture than hooks, yet like his best work, the songs on Rattle That Lock will remain in the heads of faithful listeners.