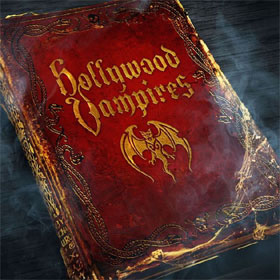 File Next to: Alice Cooper, Aerosmith, the infamous A Toot and a Snore in ’74 bootleg

The original Hollywood Vampires was an informal early ’70s all-star collective of L.A. scenesters who engaged in drink, drugs and general rabble-rousing (and – only rarely – music). Most of its alumni have either died (Harry Nilsson, John Lennon, Keith Moon) or cleaned up (Alice Cooper, Ringo Starr, Micky Dolenz). Today’s aggregation of the same name is led by Cooper, Aerosmith‘s Joe Perry, and…Johnny Depp. That should tell you most of what you need to know about this project. The tunes – covers and two originals – rock hard, with enough humor to keep things afloat. The Coop is nobody’s idea of a great singer, but the songs and arrangements make the most of his particular talents. Perry handles the big guitar parts, and it’s hard to know what exactly Depp is doing here. The whole affair is supremely inconsequential; it’s also a lot of fun.