I recently attended the Americana Music Honors & Awards show in Nashville, Tennessee. Wait, wait: stay with me here. While it’s true that I’m not known far and wide as a fan (much less an aficionado) of the genre, I’m increasingly finding that a slice of it now and then does appeal to me. In fact, upon attending and covering a previous AmericanaFest (and the attending conferences) in 2012, I came away rating it one of the best music festivals I’d ever experienced. More than three years later, I stand by that assessment.

As in 2012, a highlight of the entire multiple-day extravaganza was, for me, the awards show. Not that I have any special interest in award shows, but the nature of this one – highlighting the best that the big-tent genre has to offer – means that it represents an excellent sampler of what’s hot, so to speak. 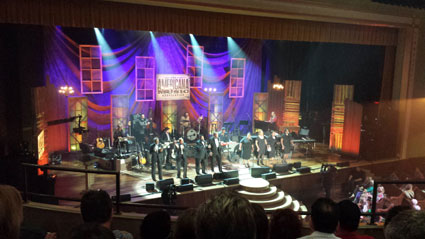 The seats in the historic Ryman Auditorium aren’t comfortable (and they serve to remind me of one of several reasons behind my leaving the Catholic church half a lifetime ago), and the already scheduled-to-be-long-show was all but guaranteed to run well over time (which it did), but the show nonetheless made an excellent way to spend a Nashville evening.

One of popular music’s most engaging personalities, the genre-spanning Jim Lauderdale was once again the emcee. His easygoing banter made the sometimes long breaks between acts and awards (while the set crew rearranged the stage for the next act) go by quickly. The award introductions – and for the most part, the acceptance speeches – were generally far from memorable; the scripted banter served mainly to demonstrate which personalities were comfortable speaking onstage (Robyn Hitchcock, for example) and which weren’t (some male-female duo whose name escaped me, but whose male half reminded me of a Jack Black character).

A couple of the artists who won gave notable acceptance speeches: The Mavericks‘ Raul Malo got in a subtle jab about politics and American xenophobia without mentioning anyone by name, and Buffy Sainte-Marie had some very moving words in accepting her Free Speech in Music award. Elsewhere, God got thanks from Ricky Skaggs, and Don Henley (Lifetime Achievement Trailblazer) seemed to revel in finding a new audience that – unlike the rock world – doesn’t despise him and his every utterance.

I’m a huge fan of Steppenwolf, but I’ll be damned if I can sort out why John Kay was there. Props to his co-presenter — or Jim Lauderdale; I forget which — for calling out Monster as an important political statement. He didn’t even mention the new 2CD singles collection from Real Gone Music; c’mon, John, get a plug in there! (Oh, now I remember: he presented Buffy Sainte-Marie with her award.)

One supposes that a genre that used to take its sartorial cues from Nudie’s (these days from Manuel, whose clothing work looks quite similar) wouldn’t find the handmade “trophies” tacky, but from my vantage point, the garishly painted and decorated instrument facsimiles that passed for trophies were lurid and cheap looking at the same time. But hey, I didn’t win one, so no worries.

The musical number that opened the show featured a four-man gospel group and a three-woman gospel group, backed by the full house band. It put anyone who didn’t already know on notice that Americana is meant to include all sorts of indigenous American musical forms; some see it as an alternative to Garth Brooks, Jason Aldean and bro-country, but it’s much deeper and more meaningful than that (the dubious lauding of Don Henley notwithstanding).

Most of the acts up for the big awards took a turn onstage, making the musical parts of the evening very much a showcase event. Rhiannon Giddens (formerly of Carolina Chocolate Drops, whom I saw at the 2012 show) floored the audience with a multi-part number that showcased her fiddle playing and her stunning ability to sing both field-holler style gospel-blues and more commercial-sounding styles backed by a full band. 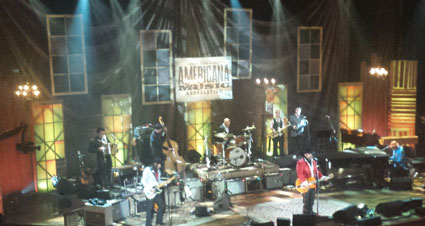 Lee Ann Womack sounded to this Americana novitiate very much like a cross between Tammy Wynette and Loretta Lynn, proving that her star hasn’t diminished, even if her chart activity has (somewhat). Both Houndmouth and Shakey Graves showed why they were in the running for Emerging Artist of the Year. Shakey Graves’ performance was easily a highlight of the entire show.

Keb Mo’ came out onstage, and to his left was a black hollowbody Gibson guitar on a stand. “Ladies and gentlemen, meet Lucille,” he said, before embarking on a heartfelt tribute to the recently departed BB King. He followed that with a performance — pointedly not playing Lucille, but instead serenading her — that paid additional tribute to King, while sounding more like George Benson.

But (other than that, and Giddens’ bravura turn) the best musical performances came from the established artists: Los Lobos (there to accept a Lifetime Achievement Award), Buffy Sainte-Marie (her still-relevant “Universal Soldier”), and the Mavericks. When the Mavericks won the Duo/Group of the Year, Malo gasped, “Holy shit! We won something!” He also won the biggest laugh of the evening for that quip.

The only artist who disappointed was one Nikki Lane; her shtick seemed lifted from the late Amy Winehouse, clumsily twanged up for an Americana audience. Even with Don Was out sick, the house band was superb in that Nashville way, with Little Feat‘s Bill Payne on piano among a who’s who of session players.

As I mentioned, the entire affair ran very much over time, and near the end quite a number of audience members (and performers) left so that they could make it to one of the multiple venues hosting showcase musical sets later that evening. I stayed until the very end, looking forward to the everybody-onstage closing number. This time it was Los Lobos, joined by, well, everybody backstage who had (or even didn’t have) a guitar. Lauderdale grabbed his acoustic, too. That whole all-in affair was sloppy as those things invariably are, worsened by the mid-song appearance of that male-female duo I mentioned already. They didn’t pay much attention to their fellow musicians; at the end of a verse, they both opened their mouths to sing, and their miscue threw several of the other players off their game. But everybody had fun, as did the audience.

The 2015 Americana Music Honors & Awards will be broadcast (in edited form) on PBS’ Austin City Limits later this year.