Home  »  Americana • interview   »   The Revelers: Get Ready to Move the Tables and Dance

The Revelers: Get Ready to Move the Tables and Dance 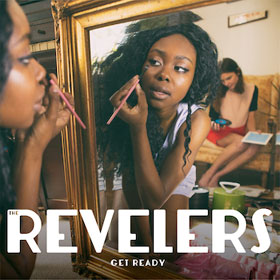 Eclectic Louisiana-based group The Revelers make music for dancing. “It has to be danceable,” says multi-instrumentalist Daniel Coolik. “We pride ourselves on being a get-up-and-move sort of band. That’s where we come from. If you play stuff that people can’t dance to, they’re just not going to come out.” When called upon to do so, Coolik says that The Revelers are a “dance hall, club kind of band” who can play a four hour set of “all the old songs you’d want to hear.” The band hoped that people would move tables out of the way and dance for the Sep. 11 date at Asheville NC’s ISIS Restaurant & Music Hall.

Though they’re often referred to as a “supergroup” – they’re all previous members of celebrated Americana acts The Pine Leaf Boys and/or The Red Stick Ramblers – the musicians in The Revelers don’t take themselves too seriously. Their Wikipedia entry includes a number of fanciful “facts” such as this one: “[Daniel Coolik] has since renounced his faith in Bluegrass Music. He’s more into Stax now.” Coolik chuckles and admits that much of that information was put in “just to see how much we could get away with.” He and his bandmates do have a deep affinity for southern soul from the Memphis label, though. 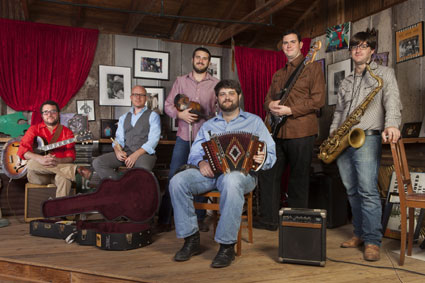 In fact that open-minded approach informs The Revelers’ music. Less genre-specific than the bands out of which it rose, The Revelers fold in healthy amounts of country, rock ‘n’ roll, blues, and western swing into their Cajun musical stew. Sometimes described as a Zydeco or “swamp pop” group, The Revelers consciously aim to create music that can’t easily be described with a simple label. “We’re trying to do more rock ‘n’ roll,” Coolik says, though the group’s deep Louisiana roots – not to mention their decision to sing many songs in French – color the music so that it’s always interesting and unique. And he notes that “there’s a lot of crossover between Cajun and country music,” both of which find their way into The Revelers’ sound. “When somebody [in the band] brings a song, we ask ourselves, ‘How does this fit into what we’re doing?’”

What The Revelers are doing is staying busy, both in the studio and on the road. 2014 saw the release of Play the Swamp Pop Classics, Vol. 1, an EP containing four traditional covers. And the group’s most recent effort is the all-originals Get Ready. The ISIS date was a CD release party for the new Get Ready disc, the band’s second full-length release.

Swamp pop is an umbrella term used to describe music from Louisiana, but the label often applies to very disparate styles of music. Coolik describes it as a style of music often made by “Cajun musicians coming out of playing French, Acadian music. They listened to Fats Domino, the rock ‘n’ roll and rhythm and blues that was coming out of New Orleans, that kind of 6/8 beat.” The fact that the musicians came out of southwest Louisiana influenced the way that they played, Coolik says. And like The Revelers’ music, “it was for dancing.”

The band finds itself in demand for a number of different kinds of engagements. “We just played at a concert series in Connecticut, something that we’ve been doing [annually] for a couple of years now,” says Coolik. “We did that, and then we had a nice, easy day gig. We’re playing a club gig in New York City tomorrow, and then a couple concert series dates in Pennsylvania.” And this time of year is the busiest. “We usually try to fill up the summer; it’s not too fun to be in and around Louisiana during the summertime.”

A Louisiana transplant, Daniel Coolik lived in Asheville from 1999 to 2008. “I met the then-Red Stick Ramblers here through friends,” he recalls. And they subsequently met up at a number of regional fiddler’s conventions. Though all of The Revelers are seasoned, touring musicians, the history of their musical style predates all of them. “We played a gig in Rhode Island not long ago,” says Coolik. “An older visiting musician came up to me, looked at us and said, ‘Y’all are so young!’”