Glen Campbell has enjoyed a long and distinguished career. He providing hired-gun guitar services on countless pop records of the 1960s (as a member of that loose aggregation known as The Wrecking Crew). He took Brian Wilson‘s place in the touring Beach Boys. He released a long string of highly regarded pop-country albums. He hosted a phenomenally successful variety television show. And he toured relentlessly as a performing musician. But it’s quite likely that history will remember him just as much for the manner in which he chose to end his career. 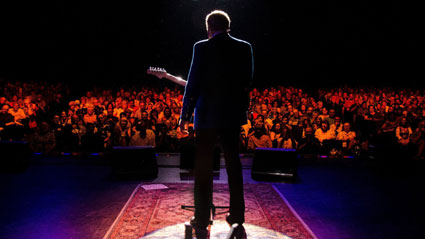 When Campbell was diagnosed with Alzheimers’ Disease in 2011, he and his family made the very significant decision not only to continue recording and performing live, but to go very public with the news about his irreversible medical condition. Campbell recorded and released an album, the pointedly-titled Ghost on the Canvas (2011). He followed that up with a collaborative release with longtime musical associate, composer Jimmy Webb (Glen Campbell and Jimmy Webb in Session). And the 2014 film Glen Campbell: I’ll Be Me documented his ongoing struggle with Alzheimer’s, specifically focusing on both his personal and family life as well as the long goodbye that was his 150-plus date concert tour. Glen Campbell: I’ll Be Me has just been released on DVD.

Back in 2011, Campbell had just finished recording sessions for Ghost on the Canvas with producer Julian Raymond. “We were just getting ready to go out and promote [the album] when we got the diagnosis,” says Glen’s wife, Kim Campbell. She says that Raymond approached his friend, filmmaker James Keach, as well as Keach’s then-wife Jane Seymour, suggesting to them that a documentary film would be “a great opportunity to preserve the legacy of this great entertainer.” It would also chronicle Campbell’s courage in facing Alzheimer’s head on, while continuing to perform as long as he was able.

The product of their combined efforts – Seymour is the film’s Executive Producer – is that rarest of films: deeply engrossing yet (at least for this viewer) extremely difficult to watch. It’s safe to say that anyone whose life has been touched by Alzheimer’s will find many scenes painfully resonant. When I made that observation to Kim Campbell, she correctly guessed that I had some experience with Alzheimer’s (my paternal grandmother suffered from it in her final years, in a time before the disease’s name was in widespread use; we called it dementia or “hardening of the arteries”).

At the start of the film project, Campbell’s dementia was still in its early stages, and he was able to give his enthusiastic consent to the planned concert tour and the making of the documentary. “He felt like it was the most important thing that he could be doing,” says Kim. “More important than the tour, even, was the documentary. There were a few times when we were out on tour when James and Trevor [Albert, co-producer] were not with us. Glen would ask, ‘Where are they? Where are they?’” 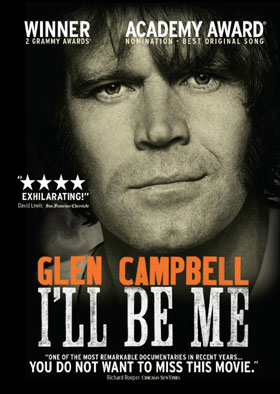 Kim would then tell Glen, “They didn’t come on this part of trip.” She laughs when she recalls his reply: “Well, then why are we here? We need to go back to Malibu to be with those guys!” It was important to all involved to let viewers know what Alzheimer’s is really like. “[Glen] wanted to raise awareness,” Kim says. “We were so excited to go to Washington, to urge congress to allocate more funds for research.”

There’s a strong undercurrent of dignity throughout I’ll Be Me; the film doesn’t shy away from showing the real-world effects of Alzheimer’s – the forgetfulness, confusion and even raging – but it never once feels exploitative. The film balances unvarnished storytelling with an understandable desire to show Campbell in a dignified manner. “That’s something we never worried about,” says Kim. “James did the film Walk the Line, about Johnny Cash. And he did such a respectful, beautiful job with that, so we had total confidence in him.”

Kim Campbell hopes that Glen Campbell: I’ll Be Me helps to remove the stigma that’s attached to Alzheimer’s. “I hope that it encourages [those dealing with a family member with Alzheimer’s] to be honest, to let people know what you’re going through. It’s nothing to be embarrassed about. Because when you’re honest, people can accept it and help. People don’t always understand Alzheimer’s, so they can be nervous being around you. But it’s a time when you need your friends and family the most.”

Kim is a strong advocate for being open and honest about what the disease can mean. She illustrates that point of view by sharing with me the latest news. “I’m caring for Glen at home now. He is cheerful and content; he’s physically healthy and strong. He does have aphasia, so he can’t really communicate verbally. He’s good with people, but he does have moments when he can be really combative and agitated. You have to learn how to deal with that, how to protect yourself.”

She makes a case in point: “I do have a black eye right now,” she says. “I got punched in the face when I was trying to change Glen’s clothes.” She laughs dryly. “That’s pretty good that after two years of combativeness, this is my first shiner. It happens; it’s part of the disease.” She describes Glen’s physical lashing out as “a natural reaction when somebody is doing something you don’t want them to do, when you can’t communicate well enough to tell them, ‘Stop!’”

Kim Campbell hopes that the film moves those dealing with the disease to “live their lives to the fullest. Keep enjoying every day as it comes, and don’t worry about tomorrow.” And along with caring for her husband and doing her best to enjoy every day, she remains an activist. “James Keach and I have started the I’ll Be Me Alzheimer’s Fund, and we’re looking forward to creating and implementing programs to help caregivers, and to provide funding for young scientists who are researching Alzheimer’s.” They plan to schedule celebrity and musical events in the near future as well. In the meantime, $2 from each purchase of the DVD made through this link will go to the Fund.