A Brief History of Rock’n’roll…Because, Why Not?

My cousin is a fifth-grade public school teacher. Put another way, he’s doing some of the most important work there is. Recently he asked me to put together “a page or two” history of rock ‘n’ roll from its beginning through the 1970s so that he could share it with his students. As patently impossible as such a task might actually be, I happily said that I’d give it a try. Here it is. — bk 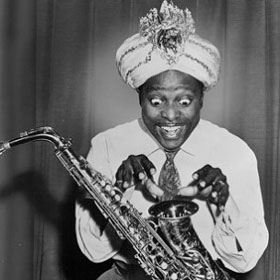 Nobody knows when, where or how the musical form we call rock’n’roll began; if anyone tries to tell you different, don’t trust them. Do your own research. For information on the origin of the term “rock’n’roll,” ask your grandparents (or at least someone over 40); I’m pretty sure I’m not allowed to write about that in a essay aimed at fifth graders.

The style of music that came to be known as rock’n’roll grew out of many other American musical styles, most notably blues (played mostly, but not only, by African Americans) and country (played primarily, but not only, but whites). Perhaps the clearest musical predecessor of rock’n’roll is the jump blues and swing style of the 1940s, typified by the music of Louis Jordan and Louis Prima. Once electric guitars gained wider use, they replaced the saxophone as the small band’s “lead” instrument; this change was one of the most important developments in rock’n’roll.

After a brief period of popular success, things went wrong for most of rock’n’roll’s early stars. Elvis was drafted; Jerry Lee Lewis endured a scandal backlash in the wake of his marriage to his 13-year old cousin; Berry was arrested on Mann Act charges; Little Richard left rock’n’roll for religion. And important dance/radio disc jockey Alan Freed – the man many credit for naming rock’n’roll – faded from the scene in disgrace after a payola (accepting bribes to play specific songs on the radio) scandal.

Meanwhile, big business had discovered that there was a market for this thing called rock’n’roll, so in the absence of many of rock’s original heroes, they manufactured new ones to take their place. This “teen idol” era featured many disposable – often musically and visually interchangeable – artists, but behind the scenes, true creativity was at work. The so-called “Brill Building” style of pop songwriting launched the careers of many important songwriters who would go onto fame in their later years: Carole King, Neil Diamond, Jeff Barry and Ellie Greenwich, Neil Sedaka. Even Lou Reed (later of the Velvet Underground) played a role in the Brill Building movement. And with his lush “wall of sound” production style, producer Phil Spector became a legend as the force behind many so-called “girl groups.” And in Detroit – always a fertile ground for music, Motown music gave rise to African American vocal groups.

Alongside the pop of that era, music product aimed at a younger set became popular; often discredited by supposedly serious critics, “bubblegum” music is arguably rock’s longest-lasting form; modern acts like Britney Spears and N*SYNC carry on the bubblegum tradition (proudly or not).

Across the Atlantic, music fans and musicians in England (and elsewhere on the continent) were listening to American rock’n’roll. As early as the late 1950s, The Beatles were developing a style that drew upon early rock’n’roll, rhythm and blues, soul, country, rockabilly and musical theater. It has often been said that the so-called “British Invasion” of the Beatles, Rolling Stones, The Who and other groups was merely a case of the British bringing an American form of music back to Americans. In the face of the American success of groups like the Rolling Stones, tens of thousands of “garage groups” formed all across the United States; that anyone-can-do-it ethos influenced a generation and planted the seed for “punk rock” of the 1970s, a style that has as much in common with very early rock’n’roll as anything else.

As rock’n’roll once again grew in popularity, musicians from other musical idioms either changed their style, or incorporated elements of rock’n’roll into their own music. Folk musician Bob Dylan famously “went electric” in the summer of 1965, and rock groups began adding non-rock sounds and textures to their music. By the middle of the 1960s, social upheaval – centered around increased availability of birth control, the rise in use of recreational drugs, and generational opposition to America’s involvement in the war in Vietnam – led to a period of musical experimentation. Myriad forms of music came out of this era: psychedelic rock and blues rock are two of the most well-known forms. Even groups who hadn’t been known for musical experimentation began to push the boundaries of popular music; the Beach Boys‘ Pet Sounds album (1966) is one of the best examples of this.

As the 1960s drew to a close, some musicians – feeling a need to step back from some of rock’s excesses – launched a “back to basics” movement. That yielded Bob Dylan’s return to acoustic and country/folk forms, The Band‘s Music From Big Pink, and eventually The Beatles’ Let it Be. By the time the 1970s began, rock’roll had split into countless sub-styles including jazz-rock, fusion, heavy metal (Black Sabbath), glam rock (T. Rex), progressive rock (Yes), space rock (Pink Floyd) classical-influenced rock (Emerson, Lake and Palmer), on and on. Meanwhile the quieter, less threatening era of the singer/songwriter calmed things down with the likes of James Taylor, Billy Joel, and The Eagles. And “classic” or “corporate” rock was on the rise; by the mid 1970s, punk rock – itself a derivative of bubblegum, garage rock, and early rock and roll bringing things full circle – would establish itself as an answer to what its practitioners saw as a bloated, big business enterprise.