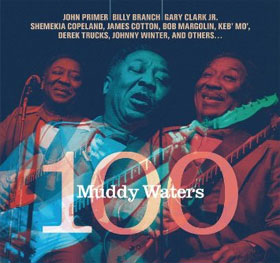 I’m on record stating my belief that the majority of tribute albums are generally a waste of nearly everyone’s time. Often, the tribute version of the tributee’s songs are too reverent by half, adding nothing to the original. Or, in other cases, the artists go too far, applying their own trademark “sound” for better or worse (usually the latter) to a song that really didn’t need any help, thanks.

Tribute albums tend to be indulgent and self-conscious even when they don’t involve the participation of the omnipresent three (Bono, Jack White, Dave Grohl) who seem, somehow, to attach themselves to every project that’s ostensibly about someone else.

And it’s because of that baggage that I bring to my listening experience that very few tribute albums make it past my slush pile. But I’m very pleased to report that Muddy Waters 100 is a highly worthy exception to the rule. In celebration of what would have been the 100th birthday of Muddy Waters (born McKinley Morganfield), Chicago producer Larry Skoller has brought together a superb band to interpret  fifteen of Waters’ best-loved songs, and some well-chosen guests help out.

John Primer is no youngster himself; at 70 years of age, he’s a well-seasoned journeyman bluesman. His guitar and vocal skills are stellar, and he manages to conjure the ambience and spirit of Muddy while (a) not aping the great man and (b) maintaining his own identity in the process. Backed by a crack team of musicians that includes guitarist Bob Margolin (he and Primer were members of Waters’ band) plus some younger but supremely talented players, Primer leads the band through Waters tunes that are well-known (“Got My Mojo Working,” “Mannish Boy”) as well as some that won’t be familiar to those who aren’t hardcore blues fiends.

The guests are players whose presence make sense: musicians who’ve been influenced by Muddy Waters show up here, as opposed to flavor-of-the-month stars brought in more for their marquee value. But nonetheless, they’re names most listeners will recognize, and their participation is welcome. Derek Trucks, Johnny Winter (in one of his last sessions before his death), James Cotton, Gary Clark Jr., and Keb’ Mo’ are just some of the spotlighted guests.

The arrangements are familiar enough that purists shouldn’t be put off, but they happily avoid that slavish reverence to which I alluded earlier. Modern beats find their way into some of the performances, but unobtrusively so. One can’t help think that the man who once deigned to make Electric Mud would have smilingly approved.

The well-annotated booklet provides some historical context for the songs chosen. An excellent essay on Muddy Waters provides more background. And the photography deserves mention: all manner of archival photos of the master at work are included in stunning clarity. The hardbound case makes the whole package a souvenir-of-sorts, but it’s all in service to the music therein.

True, April 4, 2013 was the actual 100-year anniversary of Muddy’s birth, but these things take a while to assemble, and the care that went into the making of this package – the music, the liner notes, the booklet and the physical package itself – is such that Skoller and company deserve a pass on that minor point.