Demonstrating yet again that – more than sixty-odd years after the dawn of rock’n’roll – popular music idioms remain fertile ground for experimentation and cross-fertilization, Jaga Jazzist combines rock, jazz, electronica, trip-hop, and who-knows-what-else into music that is all and none of those things at once. And as their recent show at New Mountain in Asheville, North Carolina illustrated, modern-day audiences are open to musical journeys of the sort undertaken by the group, even if those audience members don’t always completely understand what’s going on. 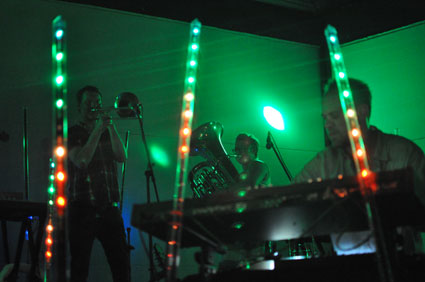 If one were to have polled the June 23 audience at New Mountain, asking each person whether they enjoyed jazz, my own guess is that most would give a noncommittal answer of the “Some of it’s okay, I guess” variety. Yet the audience reaction to Jaga Jazzist’s performance was enthusiastic and attentive. With eight members onstage (drums; bass/keyboards; guitar/keyboards; guitar/vibraphone/analog synthesizers; brass; brass/synthesizers; synthesizer/guitar; and synthesizer), the group occupied a very busy (and busy-looking) stage; the musician setup was obviously based more on facilitating visual and auditory communication amongst the musicians, and made few if any concessions to visual-aesthetic considerations. 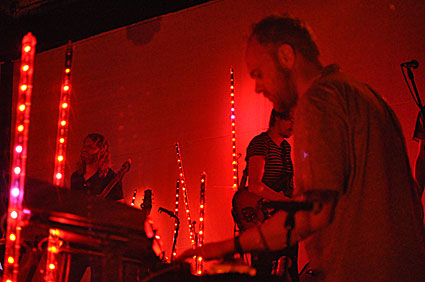 Save for the odd bit of wordless vocalization from the two-person brass backline, the music of Jaga Jazzist is completely instrumental. The lengthy tunes – typically six minutes or more, and sometimes much more – allow the band to engage in multiple musical dialogues, and while the pieces seem designed to allow plenty of space for the individual players to express themselves, the music always seems to be headed someplace specific. Jaga Jazzist are not a “noodling” band; while what they do might be categorized as experimental jazz, the music is firmly rooted in conventional styles; that built-in contrast lets the group weave unique works on the fly, but it also keeps the group grounded enough so as to not lose an audience weaned on more conventional music. 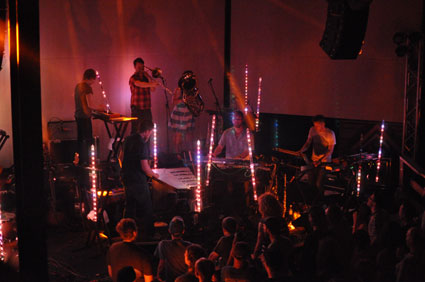 Lars Horntveth took center stage, but rather than acting as a front man, he busied himself musically, constantly switching (often multiple times within a given musical piece) between guitar, Korg analog synth, and vibraphone. And all the while, Horntveth engaged in only an occasional quick and subtle meeting of eyes with the other players; the level of unspoken communication among the seven men and one woman onstage seemed to operate at a very high level. 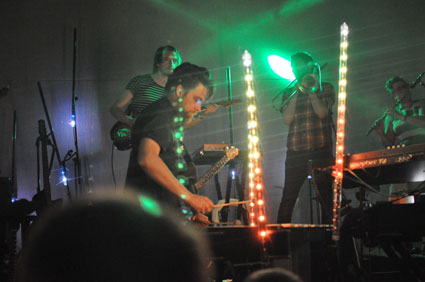 Drummer (and co-leader with brother Lars) Martin Horntveth handled the daunting task of laying down a thick and solid backbeat for the group’s exploratory music; his approach drew upon the finesse of a jazz drummer, the precision of a percussionist in a metal band, and the sheer power of a straight-ahead rock drummer. His duties also included acting as the band spokesman; other than an occasional quick smile and nod of recognition and appreciation, the other seven members of Jaga Jazzist opted not to speak to the audience during the set. 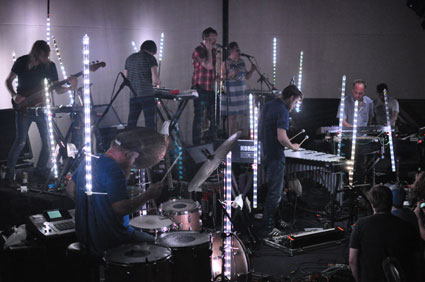 The group showcased several numbers from their latest, 2015’s Starfire (reviewed here), but they also dug into their back catalog, pulling out winning tracks such as the title work from 2009’s One Armed Bandit. Expanding a bit upon the studio version, Jaga Jazzist wrapped the work’s signature melodic lines around a dense, thickly-layered arrangement that featured plenty of crosstalk between instruments. The group skillfully juxtaposed classical/acoustic instruments with throbbing synthesizers, sinewy electric guitars, and the buttery intonation of the vibraphone. 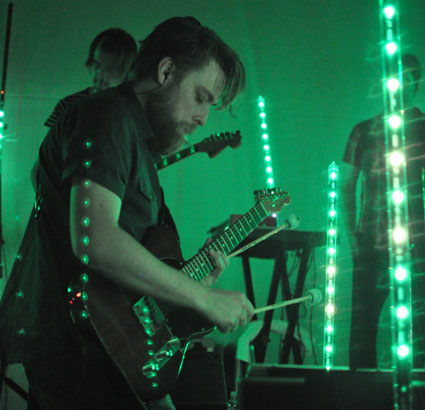 Combining such disparate instrumentation could easily result in a sonic mishmash, but the carefully arranged music of Jaga Jazzist brings those disparate instruments together in a way that suggests deeply evocative soundtrack music. Yet unlike soundtrack scores, pieces that are designed to complement a moving visual image, Jaga Jazzist’s music serves as a soundtrack to whatever mental images it conjures in the mind of the audience members.

I noticed one guy who was clearly getting into the music, trying to follow the beat. He never quite could manage to hold onto the (often tricky time signature) groove for more than a few seconds here and there, but his thorough enjoyment of the music was nonetheless manifest. In that way, he was a fairly typical audience member this night.

There really aren’t many groups to whom Jaga Jazzist can be likened. Their synthesizer-centric instrumentals occasionally call to mind the psychedelic jam of Ozric Tentacles; their inventive arrangements and hypnotic guitars coupled with modern jazz ideas suggests some of Dungen‘s work (most notably on One Armed Bandit‘s “Banafluer Overalt”). But ultimately, this eight-piece group from Norway charts their own musical path.