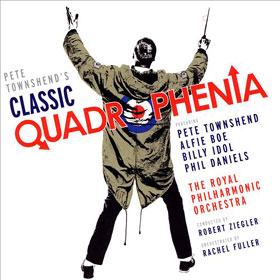 On one hand, the existence of this album makes perfect sense. Among many Who fans (myself most assuredly included), Quadrophenia ranks among the most celebrated work from Pete Townshend and/or The Who. While Tommy was arguably more groundbreaking – often (and incorrectly) cited as the first “rock opera” – Quadrophenia remains a more musically and lyrically satisfying work. While it’s true that Quadrophenia‘s story line remains more than a bit murky, it’s far more straightforward and linear than that of Tommy (or, to be sure, the never-finished Lifehouse project).

And as an expression of Townshend’s understanding – both emotionally and intellectually – of the Mod phenomenon (what Pete Meaden described as “clean living under difficult circumstances,” or something like that), Quadrophenia represents one of the composer’s most fully-realized and deeply textured works.

When The Who attempted to mount a tour in support of Quadrophenia, it didn’t really work. Between songs, Roger Daltrey(!) would attempt to explain the songs and story line, and while his intentions were good, the narration destroyed some of the flow. One can easily imagine an early 70s concert crowd responding with something along the lines of “shut up and rock!” The Quadrophenia tour-as-such was quietly abandoned in favor of a hit-laden set that featured a few Quadrophenia tracks.

But Townshend was demonstrably not finished with Quadrophenia. Though having moved on (into what we might call the post-Who era) to working on a stage version of Tommy, as well as the vastly underrated solo rock opera Psychoderelict, Townshend still wanted to put across the Quadrophenia material in its original, complete form.

The late 70s film went some way toward realizing that goal; it’s a far more nuanced movie than the overblown Tommy could have ever hoped to be, and the film version made some linear sense out of the muddled, slightly obscure story line.

But that wasn’t enough. In the early years of the new century, a reactivated Who toured the Quadrophenia material, enlisting guest vocalists to flesh out the characters. With the advantage of being able to draw upon modern sound technology, the group was able to put Quadrophenia across onstage in a way impossible a few decades earlier. They did it again on their 2012-2013 tour as well.

But even that wasn’t enough, which brings us ’round to what’s billed as Pete Townshend’s Classic Quadrophenia. Proper operatic-type vocalists (and then some) are backed by The Royal Philharmonic Orchestra and the London Oriana Choir in a new version of the extended work. Townshend’s significant other, Rachel Fuller, took on the daunting task of adapting Townshend’s material into the classical idiom.

How much one enjoys this new reading of Quadrophenia will depend to a great degree upon what it is that one liked/likes about the original 1973 double album. If John Entwistle‘s powerful bass work and the propulsive, barely-reined-in drumming of Keith Moon were among the highlights for you, then Classic Quadrophenia might feel like a letdown. As thrillingly bombastic as the orchestra can be, there’s simply no way to channel the power of the original Who’s rhythm section using classical/orchestral instrumentation.

And if Townshend’s slashing guitar and glistening, lyrical piano were big parts of what you enjoyed in Quadrophenia, you still might be disappointed in this new reading. Townshend is present on guitar here and there, and in voice. But not unlike his role in the (now greatly maligned) 25th Anniversary tour, Townshend’s presence is not a central component of Classic Quadrophenia. He’s more akin to a celebrity guest in his own work.

And finally, if Roger Daltrey’s expressive vocals were what caused you to appreciate Quadrophenia, then you’ll miss the vocals greatly on this new set. Taking the lead vocal here is Alfie Boe, a tenor most closely associated with musical theatre (Les Misérables, La bohème). Boe’s vocal performance doesn’t stray too far notes-wise from Daltrey’s version, but Boe definitely adds a “showy” and operatic shade to his reading that would be completely out of place on a rock recording.

And in fact, as rendered on Classic Quadrophenia, the material isn’t really rock at all. The orchestral trappings don’t seem at all out of place, and in many ways one suspects that this version might be closer to what Townshend originally had in mind for the material; it may well have been that since in 1973 The Who was his primary musical vehicle, that’s the route he took.

A few other vocalists of note appear on the album. Billy Idol had been involved in some of those early 21st-century performances of Quadrophenia, and few could argue that he’s the wrong choice to assist on “Bell Boy,” picking up the baton once held (shakily) by Keith Moon and then more assuredly by Sting.

And the star of Franc Roddam‘s film version of Quadrophenia, Phil Daniels, is now all grown up (56 in fact!) and lends his vocals to “Helpless Dancer” and a few other tracks. His presence establishes some conceptual continuity between this and those earlier versions of Quadrophenia, even though he’s not playing the “Jimmy” role in this new version.

To those weaned on a steady diet of rock’n’roll, Pete Townshend’s Classic Quadrophenia might – upon first listen — seem mannered and a bit stiff. But if one can open one’s mind to hearing the material presented in a classical-cum-stage idiom, there are many joys to be found.

Note: the album is available digitally, on CD, and on vinyl. This review is based upon the vinyl-format release.

Tags:pete townshend, quadrophenia, the who