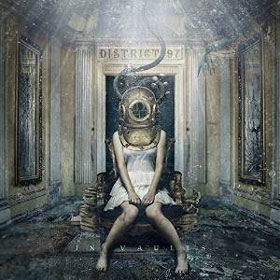 This band has been busy. With the unlikeliest of vocalists – American Idol contestant Leslie Hunt – they nonetheless kicked the door down into progressive rock, and proceeded to cut a live disc with one of John Wetton, one of the genre’s icons (King Crimson‘s 1974 Red pretty much invented the genre of prog-metal, and hasn’t been bettered since). On this, their fourth album, they dial back the classical trappings of their earlier material, but keep the melodic quotient high. Those who insist that prog can only be done properly on the Atlantic’s Eastern shores clearly haven’t heard D97. Hunt is a stunningly expressive vocalist; as such, she can hold her own amidst tricky time signatures and the slashing, angular chording that is part and parcel of modern prog. With extensive use of vocal harmonies, In Vaults deftly balances melody with the adventurism that fans of the genre demand.