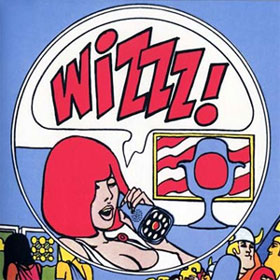 File Next to: Nuggets II: British Empire and Beyond, Roman Coppola’s CQ Soundtrack

France has long been notorious for its musical insularity. Listen to a bootleg of the Beatles‘ February 1964 show – the height of worldwide Beatlemania – and you can hear the group just fine; the Parisians merely clap. And they simply couldn’t accept the real Elvis Presley; they had to mint one of their own, Johnny Hallyday. France was seemingly resistant to outside musical influences, and that worked both ways: Françoise Hardy and Serge Gainsbourg were huge stars at home, but got relatively little traction internationally. But a newly-reissued collection shows that French musical artists did pay attention to what was happening elsewhere. Fuzztone guitars, combo organs and simple, trashy melodies are all the rage on this fourteen-track set. Is it derivative? Sure. But it’s always undeniably French, with a vaguely square café jazz vibe applied to songs worthy of (if not The Seeds, then) Nancy Sinatra and Lee Hazlewood.