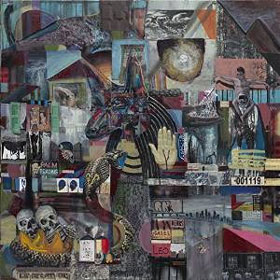 Talk about promise only partially fulfilled. When Rose Windows released Sun Dogs, their 2013, major-label debut, they displayed great potential. With a strong tribal-psych groove reminiscent of Black Mountain, the young Pacific Northwest group seemed posed for great things. So the news in Spring 2015 that they were disbanding was met with great disappointment. But all is not lost; they leave behind this new self-titled disc, a parting-shot album that delivers on what Sun Dogs only suggested. Melodic yet full of heavy/light contrast that suggests (but rarely sounds like) progressive rock, Rose Windows sidesteps the “sophomore slump” curse. Hypnotic rhythms and stomping guitars are juxtaposed against folky (yes!) flute/synth lines. And they top it all off with the expressive, yelping vocals of Rabia Shaheen Qazi. Now if they had only stuck around for a third album, who knows what fascinating musical journeys they might have revealed.