Shuggie Otis: The Music Keeps Calling Him Back (Part 4)

Bill Kopp: A lot of highly-regarded musicians have named you as an inspiration. David Byrne was instrumental in the first [2001] CD reissue of Inspiration Information. Lenny Kravitz has said great things about your music. And I hear your influence in some of Prince‘s music. Those are just two examples. What do you think about the fact that your body of work – the music you’ve made – has been influential on other artists?

Shuggie Otis: I’m flattered. It’s beyond me what has happened with my music. It’s amazing that my music has touched stars and other artists. It’s even been used in TV commercials. “Strawberry Letter #23,” for example. It’s been sampled so many times, too. The idea has been used in a lot of things, too: they change the notes around, but you still get the idea. And I’m just amazed that I had anything to do with something so big. Because that song is way, way, way bigger than I’ll ever be. When you have a hit song, it’s always gonna be bigger than the person who wrote it. No matter how big the star is, if somebody’s going to be humming that tune during the day, they’re not even thinking about the star. 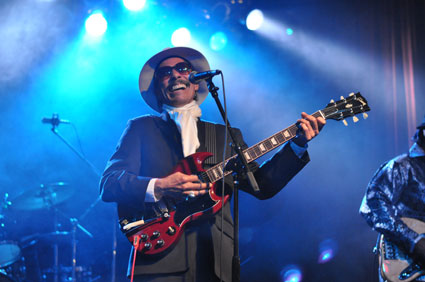 I wrote the song, and I take credit for that, but I don’t take full credit. Because I feel that I’m channeling music. Apparently, I’m a medium; I realize this more as I get older. I feel like music is something that’s coming through me, and sometimes it’s really quite interesting as it’s happening.

I don’t know what the name of all that is. But music has got to be the biggest healing force in the universe; one of my musicians was telling me that Jimi Hendrix used to say that. I said, “Yeah, I remember that album that Albert Ayler put out, Music is the Healing Force of the Universe [1970].” I’ve always liked that title. And I realized, yes it is! Not only is it a healing force, it is the biggest healing force. And I think a lot of people agree with me.

I love music so much. And to be a part of it, now, it’s something like a new high to me. First of all, you’ve got to get a little success to feel that way. You have to have been, I say, blessed with a chance to feel that feeling where you’re not jealous. Because jealousy has to go away – all away – in order to be able to write and play music well. You can’t think about anything but the music. So lately I’ve been playing more music than I ever had before. And it seems to be – it doesn’t seem to be, it is – very therapeutic for me.

And I hope that I can bring that onstage, and be therapeutic for someone who needs it. I don’t feel that I’m going to be some big healer, I just want to go there and have a good time like everybody else. I don’t want to be all serious about Shuggie Otis or his music; I just want to be a part of the crowd.

I always wanted to be separate from the crowd, before. That was a problem. I didn’t know how to relax around people. Now it seems to be much easier. I mean, I did; there is still this big misconception of me. When you’re out for so long, there’s this idea, “Oh, Shuggie? He’s shy. He’s doesn’t like people. He’s afraid. He’s paranoid.” Some of those things were true. But now, for some reason – and like I say, I don’t know why – I’ve chosen to stay alive for another day. I hope!

I’m elated these days, and I don’t feel the need to ever stop being that way. As long as I stay in touch with the music, I don’t think I’m exaggerating at all: music is a natural high. It gets people to laughing and dancing and all kinds of stuff. And they get their minds off of everything that’s bothering them. And if there’s nothing bothering them, then they just keep having a good time. 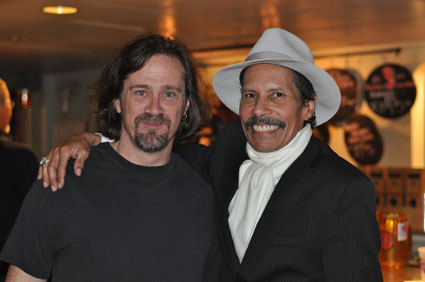 Life can be worrisome sometimes; I understand that. And I’m trying to relate to people in a much different way. I know that I can, now. Whatever conception I had of myself before, it’s different now. The things that used to bother me, it seems like I’ve gotten over those things. The main thing is to stay alive so I can play music. And music keeps me alive. Music is what I do.

I used to think, “Oh I should have done this or that before.” But it’s a mistake to think about the past. You’ve got to just keep going.

BK: Talking to you now, it really seems that now is your time…