Shuggie Otis: The Music Keeps Calling Him Back (Part 3)

Shuggie Otis: But the songs kept calling me back. A song would be really good, and I’d think about it, and realize that I have to face whatever it is that’s bothering me about this song. It might be something personal. It’s not not necessarily that the song has anything to do with real life, but what the song is saying. I guess when the album comes out, you’ll know more about what I’m talking about. I’m happy with the songs now.

I was playing the guitar for hours last night, coming up with new ideas; all kinds of stuff. At one point I went and listened to some of the stuff I’m working on. All of the ones that I didn’t want to be on the album are going to be on there after all! I came back around and realized, “These songs sound like my fans would like them.” 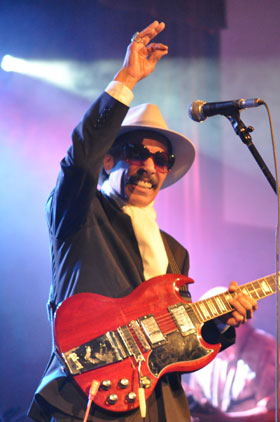 But it’s not just my fans I’m thinking about. The songs have to please me first. And that’s what the problem was before: “I don’t want to use that song; it bothers me personally.” I had to detach myself and say, “Wait a minute; forget that. Is the song any good? Do you think somebody else might like it? Forget what it’s saying, because not everybody cares that much about what [lyrics] you’re writing!” If the music’s good, you have to ask yourself, “Will this work? Do you want to put this out?” And I thought it was kind of funny how many times I’d keep shelving these songs. But now, okay, they’re coming out.

Bill Kopp: Where does your music come from? Do you sit down and say, “Okay, time to write a song,” or does it happen some other way?

SO: I can’t do that too well. I can, but I don’t ever accept what comes that way. Because I know it won’t come out they way I’d like. I mean, it has to come to me. Believe it: I’ve come up with ideas that I thought were great – just recently – and then a few weeks go by, and then, “No, that’s one’s going away forever. And that one, too. And that one.” But some of them call you back. And once they come to me, then I’ll stay with them for hours. And days. Weeks, however long it takes.

And I’m trying to step on it now, because I don’t want to hold up the record company and just take my time. That’s not the [goal] at all. What I’m trying to do is work with a quick pace. When I’m in the studio, I pretty much go at it without taking a break. And I’m very, very happy to get into a studio again. Because I had been working out of my home studio. And that’s great, but to get back into a real studio is something extra special for me. That’s something I haven’t done in, I don’t know how many years. 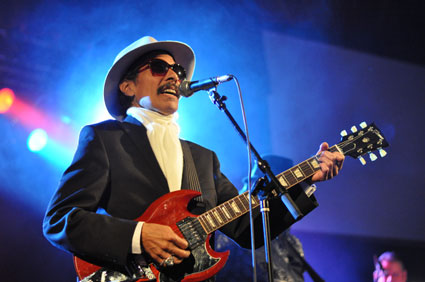 It’s a very special time for me. And I’m just praying that everything goes right. We’re all really excited. I have a band of great musicians, really great guys. We’re happy to be playing together, and to be getting such a great reaction. And I’m not going to let anything get in the way of this. If I can help it, we’re going to just keep on playing. Keep on playing, and don’t think too much about the business. Because focusing more on the business surely does hurt the music.

Before, I had that wrong mindset; I was thinking about, “Oh, how the record companies are treating me bad!” And I couldn’t get past that anger. Now, I think to myself, “It was a natural reaction; you’re a human being.” Because for years I felt for the most part that I wasn’t wanted in the business. And perhaps that was the truth. But you can take something like that and stretch it into a big, crazy notion. It shouldn’t have to run your whole life, but it can affect a person.

So my case was kind of different in that I couldn’t get a record deal even though I was so well-known. Still, it didn’t affect my life in a really bad way; I still had a good time. My life was okay; it wasn’t all as dreary as it might sound. I felt like I had been in the business since I was a kid, with my father, his band rehearsals, and that kind of thing. I was right there with show business even as a little child. So I did feel at the time that they didn’t want me, that my time would come back around. And it did come back around. I look back now, and I think, “Wow. I must have a lot of patience!” I’m very fortunate. And blessed. So I’m just going to try to give back now.

And hopefully there’s no ego trips any more. I’m not saying that I’m all the way there, that I’m perfect. Every day can be a challenge. Maybe every day is a challenge. For me, I see something happening that’s so good. So I don’t let those things bother me.