Shuggie Otis: The Music Keeps Calling him Back (Part 2)

Bill Kopp: You sent demo tapes to many labels, but nothing happened for years, until the reissue of Inspiration Information with the added Wings of Love material. That you finally got the notice you deserve seems to be more than luck. Why do you think you’re getting noticed now after being ignored for so many years? What’s special about now?

Shuggie Otis: I don’t know. I can’t really answer what’s special about it, but life continues to be special to me. I don’t know how to describe it, but I’m very inspired to play music right now. Just like I was in my late teens and early twenties. I’m 61 now. There’s something special about having that kind of enthusiasm, I think. For me, it’s a very good time now. And it hasn’t always been that smooth. Things are much brighter now. 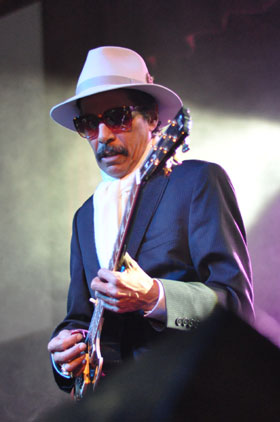 BK: If I had to pick one word to describe the album Inspiration Information to someone who had never heard it, I’d pick the word “quiet.” The album seems like the opposite of the idea of shouting to get someone’s attention. The music seems, sometimes, to almost whisper to get people to be quiet and listen.

SO: Yes, it was quiet; I agree. But it wasn’t an approach that I took purposely for that effect. It was just the way I felt. I wanted the music not to be so loud, trying to get [the listener’s] attention, trying to how express how good [I am]. I wasn’t thinking about being “out front” at that time. I feel more comfortable with that idea now. It’s kind of odd, but that’s the way it is. I’m more out front now with the guitar, so the [new] music – onstage these days – is almost the opposite of Inspiration Information.

Now I’m working on a bunch of things, including an album for Cleopatra Records. It’s coming along. I don’t know how to describe the music, but I’m very excited about it. It should be coming out later this year, for sure.

BK: One of the great things about your music is that one can’t really pin it down and call it psychedelic soul, or funk, or rock, or blues.

SO: Yeah. I like so many different kinds of music; I don’t feel like I need to stop at one style and stay there. I’m pretty free with that idea. I’ve never had to adjust or conform; I’ve had that freedom since I was a kid with the record labels. Whatever happens musically, happens. Music gets to be a problem when you try to express it in words. But I hope that you like mine. It’ll be a different concept; I can say that much. 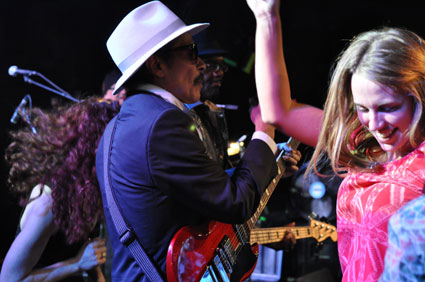 BK: Since you are proficient on so many instruments, when you write songs, do you have specific things in mind with regard to what, say, what the drums should do, what the keyboards should sound like and play, and so on?

SO: I usually have an idea of what the [parts] will do that will go along with the song. On Inspiration Information I played all the instruments, and I continue to record that way. But I am going to incorporate my band into the new recordings, too. Because the band has a special sound to it, and I want to get back into playing with live musicians.

I had been doing sessions alone for so many years; it feels so good now to play with a band these days. And I’ve got a band where I can feature myself on guitar in a different way; there’s more guitar featured now than before. And I’m very happy about that.

BK: You’re playing live onstage more now than you have at any other time in your career. What do you like most about performing, and is there anything about it you don’t enjoy?

SO: I like performing. There isn’t anything I don’t like about performing! I know that probably seems funny to people that know I’ve been away from the limelight for so long. And that wasn’t always my choosing.

I had a different mindset. My frame of mine wasn’t centered so much about…I had a sort of ego trip. Because I couldn’t get a record deal, I was thinking more about record deals, vast money, and being treated like a star. And that’s negative, when you think about it. When it comes to music, you shouldn’t have those kinds of problems going on in your head. But I did.

And now I don’t. I don’t think about music as far as making money anymore. When I write a song, it’s just stuff from the heart. Way more than it ever was before, it’s important for the song to mean something to me.

For instance, I’ve written some songs recently that I thought were good songs after I recorded them. But then I would say, “Okay, I’m not using it no more. I don’t even want to hear it.” In fact I would put almost a whole album down. I’ve done that maybe three times with the album I’m working on now.

I’m sharing something funny with you here. I wanted to know if putting the songs out would affect me in a bad way after people started listening to them. It’s a paranoia, and it’s really unnecessary. I would think, “Well, with this song here, it might sound…they might think…”