I make no secret of my deep and abiding love for mid 1960s-styled garagepunkpsych. You know the stuff: The Seeds, The Chocolate Watchband; that kind of thing. And I love the revivalist groups, too, like The Lyres, The Pandoras, and the Chesterfield Kings. 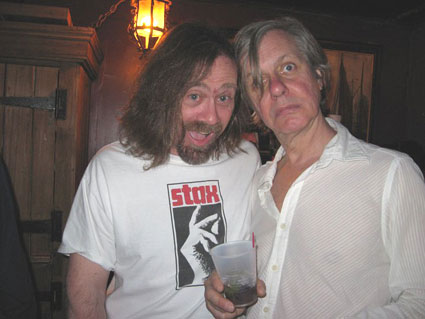 Over the course of my career, I’ve enjoyed the opportunity to interview a few of my garage rock heroes.

The Electric Prunes
“I Had Too Much to Dream (Last Night)” might have been the best song The Electric Prunes ever did (I like “Are You Lovin’ Me More (But Enjoying It Less)?” even better), but their entire catalog is filled with gems. And a later-day lineup of the group remains active today. When I interviewed The Electric Prunes’ James Lowe, we chatted about the old times and more recent developments.

The Blues Magoos
“We Ain’t Got Nothin’ Yet” was the biggest single for The Blues Magoos (my early 00’s garage band covered it as well as the Electric Prunes tunes mentioned above). But after theyr psych era, they went someplace very musically different. In my interview with The Blues Magoos’ Peppy Castro, he provides a tidy history of the band.

The Fuzztones
The Fuzztones were for many years the vanguard of the garage-psych revival. When that scene cooled down, the group decamped to Germany; European audiences have a greater appreciation than do American ones. In my multi-part chat with Fuzztones leader Rudi Protrudi, we follow the band’s history.

The Fleshtones
They’re sometimes known as “America’s Garage Band.” I’ll buy that; they’re certainly the real deal. I’ve gone on liquor store runs with singer/organist Peter Zaremba (see photo); the band once dedicated a cover of The Guess Who’s “It’s My Pride” to me; and I’ve played Peter’s Farfisa live onstage with the band on two occasions. So you might say that I’m a fan. Here’s my first interview with The Fuzztones, and here’s another one.

My trip back through time concludes tomorrow with a look at the subject I’ve written about more than anything else.