In February 1964, The Beatles landed in America. And everything changed. In the wake of the Beatles’ Stateside success – from the launchpad of The Ed Sullivan Show – the floodgates opened, and a bunch of other British groups rushed onto the American pop landscape.

Over the course of my music journo career, I’ve had the honor and pleasure of speaking with a handful of artists who were (in one way or another) connected to what we call the British Invasion (in the UK they more aptly term it the beat era). In celebration of the Musoscribe blog’s six year anniversary of providing new content every business day, here’s a roundup of feature-interviews with some of those stars. 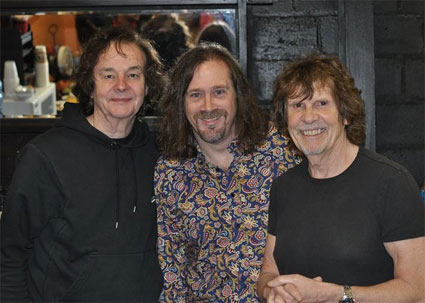 The Zombies
Though their commercial success in the USA came too late – the band had for all intents and purposes broken up by the time “Time of the Season” was released – The Zombies are now rightly considered at the forefront of British pop music of the 1960s. Another thing that makes them so remarkable is the fact that there’s a current-day lineup of the group that includes co-leaders Colin Blunstone (vocals) and Rod Argent (keyboards) alongside longtime Argent member Jim Rodford. The music they make today holds up well when compared with their 1960s output, and onstage they put on a peerless performance. I spoke with Rod Argent and Colin Blunstone in advance of their April 2014 show in Asheville, and was fortunate enough to meet them backstage (and to have them autograph the jacket of my Odessey and Oracle LP).

The Moody Blues
When most people think of The Moody Blues, their mind goes to Days of Future Passed. (Or, if they’re younger, they recall the group’s 1980s output and their ubiquity on MTV.) But the original lineup of the group enjoyed some success (in the UK, at least) with their British r&b styled music, most notably the hit “Go Now.” On the occasion of a deluxe reissue of the group’s earliest material, I enjoyed a conversation with flautist/vocalist Ray Thomas. A couple of years earlier, I interviewed (retired) keyboardist Mike Pinder about his time in the group and his solo albums. And even farther back, I interviewed drummer Graeme Edge about the 21st century Moody Blues. (Look for an interview/feature on keyboardist Patrick Moraz coming soon to Musoscribe).

Bill Wyman
Though he left the group in 1993, for three decades Wyman was the bassist in The Rolling Stones (significant;y, the group has never officially replaced him). These days his interests – musical and otherwise – no longer center around the Stones, but he’s passionate about what he does. And as I learned in the course of my 2011 interview with Bill Wyman, he’s more than happy to talk about his old group, and does so with characteristically droll wit.

The Small Faces
The music of the Small Faces didn’t make the successful Atlantic crossing, but they’re fondly remembered today. A number of high quality reissues and compilations have helped their reputation by illustrating just how good their music was (and how much of it they created). In early 2014 I interviewed drummer Kenney Jones and keyboardist Ian McLagan about their time in the group. Sadly, McLagan passed away just a few months later.

The Remains
Yes, it’s true that The Remains weren’t a British group,. But led by Barry Tashian, the Boston-based group did in fact tour with The Beatles on their 1965 USA concert series. Immortalized in Lenny Kaye‘s garage rock Nuggets compilation, the group left behind a slim but impressive catalog of music. I spoke at great length with The Remains’ Barry Tashian in 2010.

1964: The Tribute
Ever since the 1970s era Beatlemania show, Beatles tribute bands have been an in-demand presence on the concert circuit. In 2012 I interviewed Mark Benson of the group 1964: The Tribute.

Stay tuned for more rock’n’roll reminiscences. And as always, thanks for reading.