Album Review: The Volt Per Octaves — Joining the Circuits 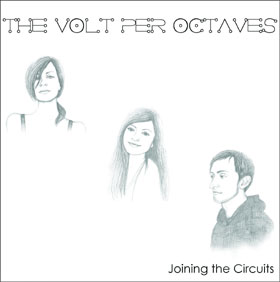 There’s a line of thinking that insists electronic-based music is cold, bloodless, and bereft of emotion. And in its most high-profile variant (EDM, or electronic dance music), the style places infinitely more emphasis on beat than melody. But while there’s plenty of aural evidence to support those assertions, that perspective simply doesn’t account for the music created by Asheville NC-based trio The Volt Per Octaves. As displayed on Joining the Circuits, their new (and fifth) album, the group’s music is emotionally evocative, lush and textured, melodic, and – for lack of a better word – organic.

The Volt Per Octaves are a family group: Nick Montoya plays an assortment of synthesizers (more on those in a moment) as well as a talkbox unit, Theremin, and electric piano. He also handles drum programming; there are no “real drums” on Joining the Circuits. Nick’s spouse Anna Rhoney Montoya plays more synthesizers and electric piano. And the couple’s daughter Eva Montoya plays yet-more-synths and melodica. Though their music is largely instrumental, all three handle vocals. Most songwriting is credited to Nick and Anna, with occasional compositional collaborations with daughter Eva; famed Parliament/Funkaledelic keyboardist Bernie Worrell (a longtime friend and mentor of the VPOs); and multi-instrumentalist Jason Daniello (of the very different synthesizer outfit Orgatroid), who also lends lap steel guitar to “Trim Pot.”

If such a thing were needed, Joining the Circuits could serve as a demonstration disc for a wide assortment of products manufactured (hand-built, in fact) by Moog Music, the Asheville-headquartered company that employs all three Montoyas. The gear list – happily printed on the back of the album sleeve – features new and vintage Moog instruments including Minimoog Model D (circa 1972), various Little Phatty synths (a current-day Moog innovation), the Memorymoog Plus (dating from the early 1980s), and various Moog-built Theremins. The trio also makes use of several Korg instruments, as well as the distinctive Wurlitzer Electric Piano (“student model” 206), featured on several cuts.

But none of that would matter to anyone beyond synth geeks and gear fetishists were it not for the music itself. With a sound that recalls the warmer, more humanistic end of Kraftwerk, the Volt Per Octaves apply their analogue technology to catchy, midtempo melodies. Unlike the dark and distant aesthetic favored by many of the 80s-vintage synth acts (Depeche Mode, New Order) or the sometimes hyperkinetic, dance-oriented synth outfits of that era (The Human League), The VPOs favor a warmer, friendlier approach that doesn’t reply upon any kind of faux-mopey poseur stance. It’s not difficult to imagine the trio’s songs recast as acoustic melodies; they would certainly sound different, but the sturdy underlying song structures would retain their appeal. 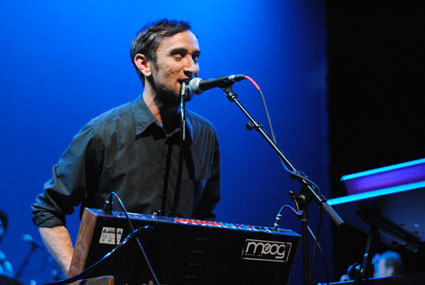 But The Volt Per Octaves’ chosen medium is the analog synthesizer – many of which are monophonic (capable of playing a single note at a time) – and so while the realization of their songs remains complex enough to interest musicians and other musically demanding types, the music’s firm rooting in melody means that the songs on Joining the Circuits are accessible to all listeners. There’s a playful feel to many of the disc’s seven tracks, one that may remind listeners of another trio, Trio (the German group that gave the world 1982’s “Da Da Da”). In fact, Trio described their music as Neue Deutsche Fröhlichkeit (New German Cheerfulness), which gets to the heart of The Volt Per Octaves’ musical personality: electronic but not foreboding; technology-based but never emotionless.

On the album’s opener “Trim Pot,” Anna Montoya’s faraway, kittenish vocals are reminiscent of Beach House‘s Victoria Legrand, with a touch of Cocteau Twins mixed in for greater expressiveness. Guest player Steve Maass‘ bass trumpet adds a delightfully unexpected non-electronic character to the instrumental “Altadena.” Whirring and whistling synth lines buzz by while a simple percussion program and a bass-bombtastic foundation hold things together. The groove-centered, dance-oriented “Mimi Cupcake” continues the instrumental approach with a melodic line that will lodge itself in the listener’s memory. Another instrumental, “Squidgity” takes things in a moodier direction; subtle touches of broken chords on the Wurlitzer heighten the pleasingly eerie, hypnotic vibe of the track.

The minor-key dynamics of “Divide Down” suggest film soundtrack music; here, The Volt Per Octaves are at their most Tangerine Dream-sounding. The track makes the disc’s most effective use of percussion simply by dropping the synth drums out of the mix at strategic parts of the tune. Nick Montoya’s talk box work on the cut calls to mind some of the best moments on The Alan Parsons Project‘s 1977 I Robot album.

“Equidistant” again features Maass’ trumpet, albeit in a slightly less prominent role. The track’s relatively simple, spare melody could have rendered it as Joining the Circuits‘ least fully-realized tune, but the varied and interesting synth textures throughout the track more than rescue it. The primary musical focus of “Ehbah” is a dance-flavored synthdrum beat, but creamy synth lines float in and around the percussion; the contrast between the motorik-styled beat and the lush synthesizers is very effective. The track fades out to the sound of electronic “wind.”

Joining the Circuits wraps up with the title track, and features Worrell on synthesizer and Wurlitzer. It’s the busiest track on the album, and it’s also among the disc’s best. Multiple melodic line crisscross one another, atop a relatively intricate synthdrum track and a propulsive (yet still decidedly midtempo) bass line. Joining the Circuits finds The Volt Per Octaves moving forward musically while remaining faithful to the sonic approach upon which their musical aesthetic is based.

Note: a release party/show for Joining the Circuits will be held on Friday, July 17 at Asheville’s Grey Eagle. The Volt Per Octaves welcome their friend, mentor and guest, “Uncle” Bernie Worrell, onstage for the performance.