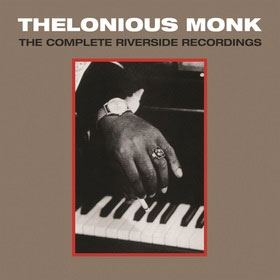 In my final year of college, I was exceedingly fortunate to have signed up for a course called American Popular Music History: Stephen Foster to the Present. There were only six of us in the class, and our professor was one Murray Silver; he had just co-authored Myra Lewis‘ book, Great Balls of Fire. But I digress, already.

One of the things we learned was that – according to at least some music scholar-historians – the term jazz was a corruption of the slang term “jass,” which was another word for “mistake.” (Of course there are other, less, um, savory theories as to the etymology of the word jazz, but this one suits my present purpose.)

Few jazz artists have more fittingly embodied that theory of the word’s origin than Thelonious Monk. Though an advanced and expressive technician, Monk’s unorthodox, dissonant phrasing and chording (if one can even call it that) led many to think he was just plain sloppy, that his performances were full of mistakes. In truth, that was simply not the case.

Monk recorded and released some forty albums under his own name; more than half of those came from the periods during which he was signed to Riverside (1955-1961) and Columbia (1962-1968). A Grammy-winning 1986 box set, The Complete Riverside Recordings, compiled all of Monk’s recordings for Riverside onto 15 compact discs. Taking note of the present-day music consumer’s preference for physically more compact sets (see also: parent company Concord Music Group’s recent small-size reissues of 2009’s The Complete Tony Bennett/Bill Evans Recordings and The Complete Stax Soul Singles Vol. 3), 2015 sees the CD set reissued in a box measuring 5” x 5½” x 1¾.” The fifteen discs are each packaged in a thin cardboard sleeve, and the original set’s booklet – featuring liner notes from the late, famed producer Orrin Keepnews – has been downsized to a 60pp CD size as well. With the new reissue’s decreased focus on packaging, the music returns to front-and-center. 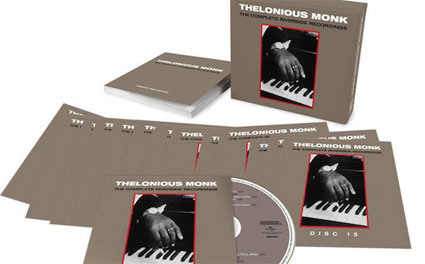 Rather than taking the approach of compiling Monk’s Riverside albums and then appending each with unreleased bonus tracks (alternate takes and such), The Complete Riverside Recordings presents a chronology based upon recording dates. Thus, regardless of when a track was originally issued (or, in some cases, not issued), the set presents an audio document of 153 studio, club and concert recordings – solo and with sidemen – in the order that Thelonious Monk experienced them.

Monk’s arrangements on the band material are quite democratic – most everyone gets his turn in the spotlight. And the live tracks have a level of excitement that the studio cuts – no matter how inventive and well-executed – simply cannot match. His solo pieces are by definition a bit more idiosyncratic, but once one allows for and accepts Monk’s unconventional approach to the piano keyboard, they’re fascinating.

The alternate takes demonstrate the level of inventiveness and spontaneity inherent in Monk’s (and his sidemen’s) playing. While it’s generally clear why one take was ultimately chosen for (original) release over another, even the initially-unused takes (and breakdowns, for that matter) are a treasure. The alternates and breakdowns constitute about 10% of the total music on these discs, but their presentation in context helps provide the listener with a sense of how the original sessions unfolded.

For anyone whose interest in Thelonious Monk extends beyond casual – in other words, for anyone whose appetite has been whetted by, say, Misterioso – the comprehensive The Complete Riverside Recordings merits serious consideration.

Note: A vinyl version of this set seems only to have been released in Japan (circa 1988) and sells on eBay – assuming you can even find one for sale – for more than twice the price of this new, slimmed-down CD set.