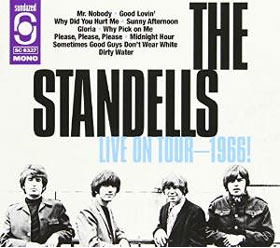 The Standells – considered a quintessential protopunk band of the 1960s – got their start as a matching-suited, club band playing frat-rock and covers of the day. The pride of Boston thanks to their name-checking 1966 hit, “Dirty Water,” The Standells weren’t even from Massachusetts; they were a Los Angeles group.

But with the passing of a few months and a few band members, The Standells quickly coalesced a lineup around founder and former solo act, keyboardist Larry Tamblyn, and former Mouseketeer Dick Dodd on vocals and drums. The band toughened their image, and signed with Tower Records, where they began to work with producer Ed Cobb. Cobb would write (or co-write) “Dirty Water” for (or with) the group, and went on to produce another legendary 60s garage group, The Chocolate Watchband.

Buoyed by the success of “Dirty Water,” the group cut more songs in the nascent garage rock style, including genre classics “Sometimes Good Guys Don’t Wear White,” “Riot on Sunset Strip” (from the 1967 teen exploitation movie of the same name), “Why Pick on Me,” and the banned-in-Texas “Try It.” By ’68 the group’s style was past its sell-by date, and though they would continue with various lineups, no new music was forthcoming.

Back in ’64 an early Standells lineup released The Standells in Person at P.J.’s, but that set captured the pre-garage version of the group. In 2001, Sundazed released a 10” vinyl record, The Live Ones! (a riff on the title of The Standells’ second of three 1966 LPs, The Hot Ones!). That set provided the first officially-available live document of the garage-era group. Recorded in the summer of 1966 at Michigan State University, the surprisingly good quality recording found the band at their snarling yet good-natured, fuzztone best.

Now – almost fifty years after it was recorded – Sundazed has unearthed yet another live document of The Standells from that banner year of 1966. Recorded no more than a couple of months after the show that would yield The Live Ones!, and performed less than sixty miles southeast, Live on Tour – 1966! is equally exciting, and it features twice as many songs.

The recording opens with a laughably tepid introduction (probably by a college administrator) explaining that there will be two acts on the evening’s bill: The Standells (curiously, this is met by silence from the audience) and The Beach Boys. The crowd seems to chuckle inwardly at the announcement before breaking into delayed applause. But once the announcer introduces The Standells, the crowd’s reaction is much more enthusiastic. A friendly bit of pandering from Dick Dodd (“We hear somebody won a game today; is that right?”) leads straight into the guitar buzz of “Mr. Nobody.”

The setlist doesn’t differ greatly from what’s showcased on The Live Ones!; while that set featured songs closely associated with The Standells, this disc features the complete opening-act length set, a setlist that included covers that were well-known (and oft-played) by garage bands across the USA: “Good Lovin’,” James Brown‘s “Please, Please, Please,” Wilson Pickett‘s “Midnight Hour,” and the all-but-required “Gloria.” But The Standells imbue their readings of these tunes with just the right combination of polish and grunge.

Mid-set, they feature a Tamblyn lead vocal (with ample vocal support from the rest of the band) in a faithful cover of the then-brand-new “Sunny Afternoon.” The Kinks‘ single had been released in the USA weeks before; at the time of this concert (October 22, 1966) the tune was riding high on the singles charts. Dodd notes afterward, “That song can be found on an album of ours which will be released around Christmas time, where we do nothing but everybody else’s hits…probably the best album we ever made.” It wasn’t, not by a long shot; the world didn’t really need a Standells reading of “Eleanor Rigby.”

But there are no Beatles ballad covers on Live on Tour –1966! “Now that we’ve messed up everybody else’s number, we’d like to mess up one of our own.” Drawing out the tension with a serious of groan-eliciting one-liners, the band finally relents and launches into the garage rock anthem, “Sometimes Good Guys Don’t Wear White,” playing it in a fashion that’s both Just Like the Record and shot through with the energy that only comes from an onstage performance. The crowd claps along start to finish while the band closes their set with their million-selling hit, “Dirty Water.”

With the fine exception of the low-key Kinks cover, Live on Tour –1966! is a consistently uptempo, rocking good time, and proves – in case there were any doubts – that The Standells were a solid, engaging live band, one that leveraged a garage-punk image with professional musicianship.

This review was previously published in BLURT Magazine.