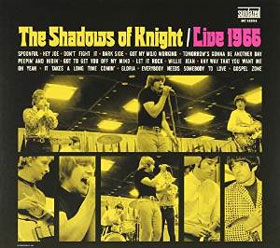 In their heyday – a period that began in 1966 and ended, well, in 1966 – Chicago’s Shadows of Knight embodied what we now look back upon as the garage rock aesthetic. A group of suburban teens inspired – like countless other groups of teens in those days – by the British Invasion, the Shadows of Knight channeled American blues through the filter of British sensibilities (Them, Rolling Stones, Animals), reinterpreting it yet again and creating something fresh and exciting in the process. A newly-released live recording, Live 1966 offers a previously unheard document of the group’s onstage power.

The group released two albums in 1966 (and one more a few years later) but their strength was best expressed on the 45rpm single. Their reading of Van Morrison‘s “Gloria” – originally a b-side of Them’s top ten hit “Baby Please Don’t Go” – helped enshrine the tune as a garage rock classic. Though the group’s success was short-lived, The Shadows of Knight received belated attention when their reading of Bo Diddley‘s “Oh Yeah” was featured on Side Two of Lenny Kaye‘s influential 1972 compilation, Nuggets: Original Artyfacts From the First Psychedelic Era 1965-1968.

On the group’s 1966 singles and albums, the production (credited on the sleeve only as “A Dunwich Production”) was of the basic, let’s-get-it-done variety. In those days – especially where a small regional label such as Dunwich was concerned – bands were expected to have their repertoire tight, ready to lay down in the studio in one take. (With their bigger budgets, larger labels often dispensed altogether with the niceties, enlisting so-called Wrecking Crew session players to record, one-and-done, in the stead of the named groups.)

What this meant in practice for The Shadows of Knight is that their finished studio recordings did indeed sound a good bit like the actual group. The eleven songs on the group’s Gloria LP – nine overs, three originals – captured the band’s assertive, energetic playing and singing. They had certainly gotten tight playing live gigs, and the records captured that vibe as best as could be expected.

But there’s nothing like the real thing, and Live 1966 is that real thing. Recorded in front of what Jeff Jarema‘s liner note essay calls “suburban Chicago’s hands-down hippest teen club,” Arlington Heights’ Cellar, Live 1966 finds the group playing to a familiar and appreciative hometown crowd. Jarema notes that there’s no way of knowing the date of this performance – club owner Paul Sampson was known to record shows – it likely dates from late in the year, after two of the group’s albums had been released (the compilers’ best guess is December ’66).

These white suburban kids sure did have a thing for the blues; their first LP featured no less than three Willie Dixon numbers alongside covers of Bo Diddley, John Lee Hooker, and Muddy Waters. Live 1966 features several of these. Even their Chuck Berry cover (“Let it Rock”) was delivered in a bluesy manner. And their original tunes were a clear attempt to write in that same blues-based style.

The second album widened the group’s scope a bit to include their take on New Orleans funky pop (Huey “Piano” Smith‘s “High Blood Pressure”). A cover of the Boyce/Hart number “Tomorrow’s Going to Be Another Day,” released at almost the same time as the Monkees‘ version, couldn’t have less in common with the prefab four’s reading; in the hands of The Shadows of Knight, the tune sounds like early Rolling Stones.

A solid selection of tunes from Back Door Men figures into the Live 1966 set, too, including a soulful run-through of Jimmy Reed‘s “Peepin’ and Hidin’” sung here not by drummer Tom Schiffour (he sang on the single version) but by lead guitarist Joe Kelley.

Live 1966 is presented in astonishingly good audio quality; the monaural recording accurately captures David “Hawk” Wolinski‘s walking bass lines. The drums aren’t as forward in the mix as modern tastes might dictate, but overall Live 1966 is quite the well-balanced recording. Occasional amplifier hum only adds to the you-are-there feel of the recording, and Kelley’s stinging guitar leads punch through the mix. The group shines on “Oh Yeah,” with the band – led by a screaming Jim Sohns – adding just a bit more swagger and abandon than found on their studio version.

Closing with six wild minutes of “Gloria,” The Shadows of Knight deliver a loose yet forceful performance that renders The Doors‘ posthumously-released live version (recorded in the late 60s) completely unnecessary. And a brief quote from The Mothers of Invention‘s just-released Freak Out! suggests that the group had more than just the blues on their mind.

As a heretofore undiscovered document of mid-sixties garage rock at its rawest and most authentic, The Shadows of Knights’ Live 1966 is essential for fans of the genre.

The review was previously published in BLURT Magazine.