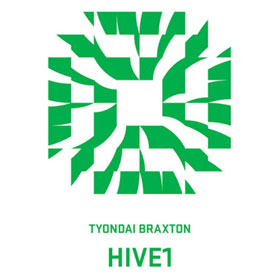 File Next to: David Byrne and Brian Eno, TR-i

Son of legendary jazz improv master Anthony Braxton, Tyondai Braxton (formerly of Battles) has set out to make a name of his own. The experimental HIVE work was initially commissioned by the Guggenheim Museum’s Works & Process initiative. Employing multiple musicians manipulating content via laptop computers, amplified acoustic percussion, and other instruments, HIVE was a multimedia feast. Subsequent performances of the work took place in London, Sydney, and at the boundary-pushing 2015 Big Ears Festival in Knoxville, Tennessee. HIVE1 features eight pieces conceived for the original installation. The man-meets-machine pieces successfully hybridize bass-bombing synthesizer lines and percussion into a sweeping, majestic, often heady mix. There’s a three-dimensional feel to the album; even without headphones, the listener is virtually transported to the center of Braxton’s sonic activities. The lines between synthetic and organic are constantly blurred, and – even stripped of its visual components – HIVE1 is never less than interesting.