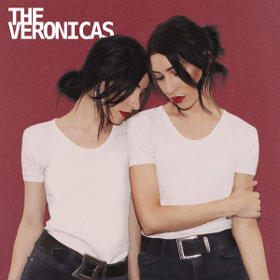 When Australian twins Jess and Lisa Origliasso scored their first record deal, it made sense: though young, they had already established themselves as skilled songwriters. Their 2005 debut, The Secret Life of The Veronicas was packed with intelligent, well-crafted pop, with a decidedly rock-oriented sensibility. No pop tarts were they. But then came the sophomore slump: 2007’s Hook Me Up reeked of market analysis and packaging, and found the sisters mired in ill-advised electroclash arrangements. Next came a several-year battle with their label, a time during which the Origliasso sisters all but dropped off the pop landscape. But all has been made right with a label change and a self-titled album. “Sanctified” is all melodrama and heavy beats, and “Did You Miss Me (I’m a Veronica)” is a hip-hop flavored musical statement of renewed purpose. The Veronicas is a welcome musical rapprochement of modern production flourishes and solid pop songcraft.