Album Review: Yes — Like It Is: Live at the Mesa Arts Center 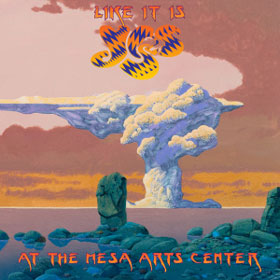 2015 sees the release not only of Yes‘ Progeny recordings, but another live set, Like It Is: Live at the Mesa Arts Center. The latter was recorded in the summer of 2014, but features complete performances of the same albums that the Yessongs tour promoted: 1971’s Fragile and 1972’s Close to the Edge.

A lot had changed for Yes between 1972 and 2014. But then 44 years is a very long time in the life of a band. Members came and went (and came and went), and everyone involved got a whole lot older. By the time of the show documented on Like It Is, Yes featured only three of the players from 1972: bassist Chris Squire, drummer Alan White, and guitarist Steve Howe. Keyboardist Geoff Downes had returned to the group in 2011 for their Fly From Here album and tour, and then stayed on. And new vocalist Jon Davison served as Jon Anderson‘s third replacement vocalist (after Trevor Horn and Benoît David).

While Fly From Here had marked a return to form for the band, 2014’s Heaven and Earth was a decidedly low-key affair, and it featured little of the fiery, rocking arrangements that endeared the band to generations of progressive rock fans. Even the milder moments of that album – and most of it is pretty mild – lacked the memorable melodic lines that kept tunes in listeners’ heads.

So for the 2014 tour, Yes played only a couple of tunes from Heaven and Earth, focusing instead on complete, start-to-finish versions of two of their very best releases from nearly a half century ago.

The feel of the versions on Like It Is varies substantially from the way Yes played the songs back in ’72, but the fire is still there. On one hand, having played these songs night after night should have made playing them yet again somewhat easy. But tunes like “Long Distance Runaround” and “Heart of the Sunrise” were never easy songs to play to begin with.

Davison is quite good here; unlike Benoît David — who sounded like what he was, a Jon Anderson tribute singer — he has his own voice. So while Davison hits all of Anderson’s notes, he sounds subtly different doing it. To those who insist that “No Anderson equals no Yes,” Davison’s singing will be viewed as some kind of abomination. To most everyone else, he’ll sound like a very good singer deftly walking a tightrope between singing the songs the way people expect them to be sung and holding on firmly to his own vocal identity.

Occasionally, the songs’ arrangements are streamlined a bit. For all their undeniable talents, neither Alan White nor Geoff Downes is quite the technical match of their respective predecessor in Yes. So while White does a perfectly creditable (impressive, really)  job with Bill Bruford‘s arrangement of “Cans and Brahms,” it’s only very, very good rather than stunning. And Geoff Downes is not Rick Wakeman, and his precise attack on the keyboards is a notch or two less, shall we say, daring than what The Caped One was giving the world in ’72.

As it stands, though, Like It Is: Live at Mesa Arts Center looks to be the final recorded statement for Yes. After more than twenty studio albums and more than a dozen live sets (don’t even get me started on Anderson, Wakeman, Bruford and Howe), Like It Is is a perfectly serviceable live set featuring some of the group’s best songs in a live context. It’s not perhaps the ideal final musical tribute to the just-departed Chris Squire, but for that we have Progeny.