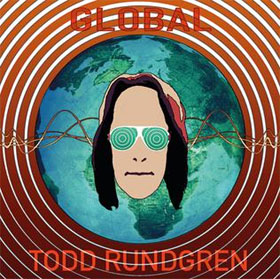 In one sense, the best artists are those who confound their fans. There’s certainly a place for the reliable musical act that releases pretty much the same album over and over again; entire careers have been built on doing just that, and it’s not without aesthetic value. “More of the same” is most assuredly not a bad thing in and of itself.

But the more intriguing creative artists are moving targets. They tire quickly of what they’ve just done, and are ceaselessly moving forward, trying new things. And that can make being a fan some pretty rough sledding. Perhaps no other currently-active musician better illustrates this situation than Todd Rundgren.

I won’t recapitulate his long and varied musical career-to-date here; for a tidy summary of his work from the late 1960s through 2004 – yeah, the essay needs updating – I’d direct you here. Suffice to say that Rundgren has made more stylistic detours than most anyone else you’d care to name. And the degree to which any of those tangential moves “works” will differ for each fan. When it comes to Todd Rundgren, the phrase your mileage may vary truly applies. For me, his Broadway-leaning material (1989’s Nearly Human and the related 1997 set Up Against It) is his least satisfying, though even those have some stellar moments. And I’m in the minority with my great admiration for the widely-maligned No World Order from 1992, a set in which Rundgren – temporarily rebranded as TR-i – takes on a sort of hip-hop-meets-Nine Inch Nails approach.

These days it’s fair to call the impossibly talented Rundgren a cult artist, though in a very real sense he’s always been one. His infallible sense of melody never fails him, no matter what musical context into which he places his music.

But cult artists don’t always have massive studio budgets, and that’s especially true of an artist who went bankrupt and sold off some of his recurring-revenue assets. Because of those realities – and, likely, owing to his actual desire to do things this way – his last several albums have been recorded on a computer, using the one-man-band approach that he (as much as anyone else) can be said to have invented.

After the stylistic missteps and dead end of Todd Rundgren’s Johnson (blooz retreads) and the truly wretched (re)Production (in which he essentially allowed other people to wreck his music), it was encouraging to hear Rundgren return to songcraft with 2013’s State. He did seem unnaturally interested in the latest trendy sounds and approaches, but he bent those forms to his own musical will.

And that’s pretty much what Todd Rundgren has done with Global. Continuing his 2004-and-onward practice of naming his releases with a single word (easier to remember than, say, The Ever Popular Tortured Artist Effect), on Global, Rundgren presents perhaps his best set of melodies since 1995’s The Individualist. In fact, some of these cuts (“Blind,” in particular) sound as if they could have been written around that time.

Rundgren has always been a thoughtful (as in full of thought) songwriter, and he’s long concerned himself with big ideas. As the title telegraphs, the songs on Global are no exception. But he does so with characteristic good humor: paraphrasing Albert Einstein‘s remark about God not playing dice with the universe, he throws in an aside: “Doesn’t take an Einstein” to figure that out.

Global has been described in some quarters as Todd’s EDM album. And I’ll admit, that description very nearly scared me off. I needn’t have worried. Many of the songs on Global do indeed have some very kinetic, dance-ready beats (for those so inclined); boing-boing synths; Cylon-sounding vocal treatments; and other “modern” trappings, but the songs themselves are very organic, and include more “real” instrumentation that we’ve heard on some of Rundgren’s other recent releases. Bobby Strickland’s sax work on “Blind” is nothing less than thrilling.

“Earth Mother” features guest spots by friends and associates including Rachel Haden (bassist extraordinaire from a fine lineage of musicians) Janet Kirker, Michele Rundgren (she was great with The Tubes back in the 80s), Jill Sobule, and Jeff Beck associate Tal Wilkenfeld. At first, Todd’s exhortations (“Can I get a shout from my sisters?”) feel a bit awkward, but it’s a groovy track. And old Utopia band mate Kasim Sulton shows up on “Skyscraper.”

Yes, it’s nearly all Todd all the time (save those guest spots) but if anyone can make that approach work – make it real, so to speak – it’s Todd Rundgren. Just when some might have counted him out – I nearly did after (re)Production – Global shows that at 67 years of age, the man still has it. Whatever it is. Here’s hoping he keeps sharing it with his listeners.