Leah Song relates that Rising Appalachia have many friends around the country who are involved in art and creative projects. “Many of them,” she notes, “end up being codependent on grants. They call it the Nonprofit-Industrial Complex. We wanted to have that feeling of being independent; and if we’re indebted to anybody, it’s to the community that supports us. We don’t want to be indebted to a third party. Because even if it’s a ‘silent donor,’ it’s something that we’re really not interested in. We want our responsibility to be to the fans, to the community, to our peers, and to our collaborators. So we decided we would [crowd fund] again. And we were really able to direct the funding we got into producing the most nuanced and delicate work we’ve ever done.” 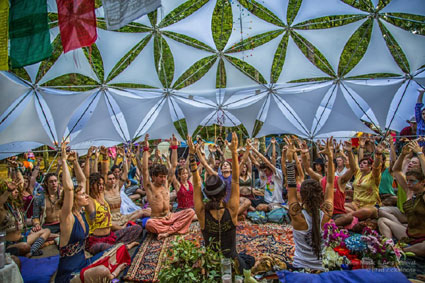 As always, Rising Appalachia is about more than the music. “We were able to tie in some amazing nonprofit work. We did the first leg of our [current] tour via rail. At the headwaters of the Mississippi, we did some work with a Native rights organization.” She makes the point that if artists are paid enough, they can put their efforts into becoming spokespeople for the causes in which they believe, and they can do work that supports those values. “Then they’re not just overworked and exhausted and always eating grilled cheese sandwiches,” she says. The goal is to make the efforts “people powered, and involving everyone in the work. And that’s a very important part of it for us.”

The group has learned a great deal through their Kickstarter experiences. “You don’t just ask and then get a bunch of money,” Leah cautions. “It’s a ton of work. We’re still licking stamps and sealing packages. On the back end, I think it’s really wise to make sure you put together offers that you can [deliver on]. And you want to be able to do that right; you don’t want to just make your goal and, ‘Thanks! Bye!!’”

Long based in New Orleans – and closely identified with the varied musical scene there – Leah and Chloe Smith relocated to Asheville NC, a city with its own musical identity. “I don’t really want to be considered an ‘Asheville band,’ says Leah, good-naturedly. “I want us to be thought of as representing the South: the mountain culture, the urban culture, the swamps. We hold this whole region as our home base. And I think our relationship to New Orleans will continue to be cultivated and long-term.” 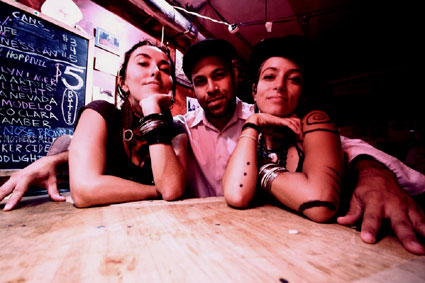 Leah explains the group’s reason for moving north to Asheville. “We came to the mountains to get some respite. We wanted the quiet relationship with nature, and we’ve been able to get parts of that on our off-time.” She sees Asheville as an ideal place to “get into the local crafts, and study the culture. We’ve spent a lot of time in Latin America and in New Orleans, so we wanted to make sure we were adding fuel to the mountain culture that is also part of our story.” Leah notes that she doesn’t intend for Asheville to be her forever home. “But,” she adds, “I don’t think that we know.”

The move to Asheville has certainly enriched the group. “An amazing team of musicians and leaders and management has stepped into our circle through this community,” Leah says. “It’s very powerful, and it has been very grounding for us.”

Another grounding experience was the group’s Amtrak tour. Train travel affords one a perspective on America that is very different from the one absorbed via airplane or car travel. Train travel was part of a larger goal of Rising Appalachia, the concept Leah calls the “slow music movement. Very loosely, it’s our entire philosophy of music, independence, and self-management. So as we fleshed it out, we asked ourselves, ‘What if it also entailed slower travel?’” The idea came about while traveling through Europe via train, something much easier done there than in the States. “We started looking into routes,” Leah recalls, “and we found that there was a lot we could not do. But there was a lot that we could do, so we built the first leg of our tour around the route itself.”

The trip highlighted both the advantages and limitations of the passenger railway system in the United States. “The resources and infrastructure are there,” insists Leah. “We have this vast country, with a codependency on fuel, on cars. And it’s really isolating. And that leaves out a whole population of people who can’t afford – or don’t choose to prioritize – a personal vehicle.” She poses a rhetorical question: “What would actually happen if we made rail travel a viable option? We feel mostly inspired. The tour involved labor and logistics, and there’s a lot to configure when you have a band and instruments, but it worked. And we went through rural areas that I had never seen in my life. You don’t see billboards and casinos and McDonald’s. You see open spaces, small towns. People sit on their porch and wave. It evoked a wonderful nostalgia and a slow pace, but it also worked. It was functional. You could see a labor force that was proud of their work. There is a beautiful pride in the work that you don’t always see at a gas station.”