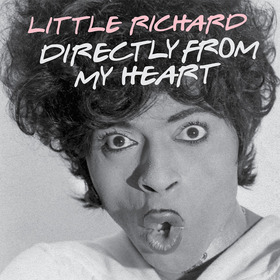 For music lovers of a certain age range, the work of Richard Penniman is the sort of music that one might only rarely make an effort to hear. The name and image of Little Richard is a virtual shorthand for some of the best qualities music has to offer: excitement, bravado, melody, energy, skill, humor…on and on. And because of his larger-than-life persona – wildly in-your-face effeminate posturing and his (nearly but not quite outsized) estimation of his own importance) – he seems somehow to always be there, and the same is true for his music.

Thanks, too, to the fact that Little Richard exerted so much influence on those who would follow (no less a figure than Paul McCartney has long held as part of his own stock-in-trade a convincing Little Richard vocal imitation), generations who grew to age after Little Richard’s heyday still know his songs. Covered by an impossibly long list of artists, and used in everything from film soundtracks to television commercials, Little Richard’s classic music is deeply embedded into popular culture and our collective consciousness.

The downside of that ubiquity, however, is that listeners might forget to stop for a moment and appreciate just how superb – not to mention wildly innovative for its time – his music really is. To help us in our modern-day reconsideration of Little Richard’s early, best-loved material, Concord Music Group has compiled a 3CD set, Directly From My Heart: The Best of the Specialty and Vee-Jay Years.

Penniman’s musical recording career began more than three years before he’d enter a studio to cut a demo for Specialty Records in early 1955. By the time he began recording for Specialty, Richard had released two albums (one each on RCA and Peacock) and six singles, none of which charted. Once at Specialty, Little Richard recorded in various sessions over a period of just more than two years; that body of work is the primary foundation upon which his musical legacy rests.

Surprisingly – or at least surprisingly to those who know the man’s work on cuts like “Long Tall Sally (The Thing)” – Little Richard cut a number of tracks that don’t have that wild, manic vibe at all. The first few cuts on Directly From My Heart are r&b/blues numbers, with none of the reckless abandon that would characterize his hit singles. They’re good, albeit a tad ordinary. Their inclusion on this set does serve to place those crazy, uptempo singles in a context more representative of Little Richard’s musical output of that era.

But it’s through the first (and a good portion of the second) disc that Little Richard’s Specialty work is chronicled. All of the greats are here: “Tutti Frutti,” “Kansas City,” “Slippin’ and Slidin’ (Peepin’ and Hidin’),” “Long Tall Sally (The Thing),” “Miss Ann,” “Ready Teddy,” “Hey-Hey-Hey-Hey,” “Rip it Up,” “Lucille,” “Jenny Jenny,” “Good Golly Miss Molly,” “The Girl Can’t Help It,” “Keep A Knockin’,” “Ooh! My Soul,” and quite a few others.

Renouncing the sinful ways of rock’n’roll, Richard left Specialty in late 1957, going on to cut religious-themed sides for several labels. But when The Beatles exploded on the scene – and in light of their championing of him as an influence – Little Richard returned to Specialty, where he cut five songs, a few of which are featured on this set. The most notable of these is “Bama Lama Bama Loo,” but they’re all rocking numbers.

From there he went to Vee-Jay (coincidentally, the U.S. label that had released early Beatles tracks), remaining with them for a year. The third disc of Directly From My Heart focuses on this lesser-known era of Little Richard’s music, and is notable in part for the appearance of pre-fame Jimi Hendrix as guitarist for several cuts.

The entire 2015 compilation is housed in a duotone (black and pink!) box, and the accompanying liner note booklet features lots of photos and an essay from Little Richard superfan Billy Vera. The booklet handily provides matrix numbers for all sixty-three tracks, but the compilers deigned not to specify (recording and/or release) dates for the tracks. The booklet makes no mention of the mastering involved in bringing this compilation to market, but the sound throughout is superb.

Beware of imitations: notoriously, Little Richard re-recorded many of his hits in greatly inferior versions, and an unknown number among the vast array of available compilations draw tracks from those. The surest way to get a tidy collection of the man’s best work is to pick up Directly From My Heart.

A few related items, if I may…