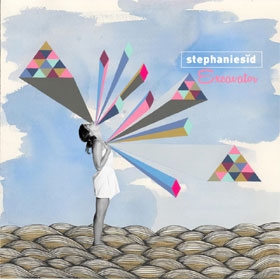 It’s rare that I review the music of artists based in my adopted hometown of Asheville NC. My reason is simple: I gotta live in this town. I feel it my duty to pull no punches when reviewing music, so if I perceive flaws or shortcoming in someone’s music, I’ll say so in my review. But when those people are my neighbors, my general approach is to take a pass, or (as I do quite often) write a feature/interview that explores the artist’s creative process and such, and leave the reviewing to others in other venues.

stephaniesĭd are the exception to that unofficial policy of mine. Both onstage and on disc, their music is distinctive, arresting, and compelling. I enthusiastically reviewed Starfruit in late 2011, and that album has worn well these ensuing three and a half years.

Excavator is the group’s latest, and it represents a darker, more contemplative and melancholy ambience than its predecessor. Ten of the eleven tracks on Excavator are written or co-written by Stephanie Morgan, an intriguing vocalist of uncanny expressiveness and range. On this record, there’s a kittenish, just-awoken quality to Morgan’s voice, and the arrangements – led primarily by Chuck Lichtenberger – are often spare, often using silence – the spaces between the notes, as they say – as the backing for Morgan’s vocalizing.

A sense of melodrama pervades the songs on Excavator. There’s a feel of regret and resignation that hangs upon the tunes. Yet despite the often minimalistic approach to the music, at times Excavator sounds like the exact opposite: the wide-screen arrangements of Polyphonic Spree.

When the band moves away from the heartbreak and melancholy – as they do on the uptempo “Battery Room” – they end up sounding like a postmodern rethink of Astrud and Joao Gilberto-styled Brazilian jazz, crossed with The Unauthorized Biography of Reinhold Messner-era Ben Folds Five. On “Baseball Player,” they sound a good bit like 2015 America’s answer to Radiohead (Morgan is on record as a big fan of Thom Yorke‘s group) circa Kid A. Halfway through Excavator, “Baseball Player” is the first instance of electric guitar taking a prominent – albeit exceedingly textural – role in the music. The album’s instrumental lineup (beyond Morgan and Lichtenberger) features upright bass, trombone, saxophone, bass clarinet, violin and cello.

As such, it’s difficult (not to mention pointless) to classify Excavator as a rock album. It’s certainly not jazz, though the group’s inventive reading of “My Funny Valentine” has elements of jazz, especially in Lichtenberger’s nimble piano work. It’s also not at all what one could call an immediate record; one has to immerse oneself in the music, or more accurately, allow the music to envelop the listener. That’s a tall order for a musical act to place upon a potential listener, but with Excavator, stephaniesĭd provide a handsome reward for the investment. Simply put, Excavator is worth the effort required to get into the current musical world of stephaniesĭd.