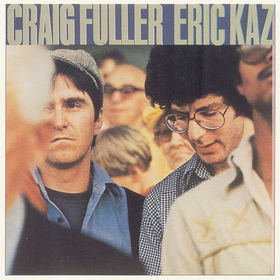 There’s always a place for solid, midtempo, soft-rock. Or at least there was one before what passes for country music co-opted the style, watered it down and called it modern country (or, heaven forfend, bro country).

For a time in the mid to late 1970s, artists like Pure Prairie League, post-prog Ambrosia, Ace, Michael Martin Murphey, and even (dare I say this) The Eagles bridged the sonic gap between rock and singer-songwriter-oriented material, and for their trouble were often rewarded with chart success.

But not always: sometimes fine, solid albums sank without a trace. “Such,” writes Ed Osborne in his liner notes for the Real Gone Music expanded reissue of Craig Fuller / Eric Kaz, “are the vagaries of the music business.”

Their 1978 LP slipped right by the notice of this then-fourteen year old, but then I was into other things. Had I heard the record, I might have thought to myself, “this sounds a lot like Pure Prairie League.” And I would have been a very clever pubescent teen, because Craig Fuller was the lead singer on many of that group’s hits, 1972’s “Falling In and Out of Love” (though you may know it as “Amie”).

By the late 70s, Fuller had teamed up with fellow singer/songwriter Kaz for what would be a one-off collaboration. On Craig Fuller / Eric Kaz, the two take turns at the lead vocal spot, turning in borderline easy listening melodies, many of which fall into the sonic space where The Eagles’ “Desperado” lives.

All of Craig Fuller / Eric Kaz‘s ten tracks were written by one or the other singer, with the most commercially appealing cut (“Let the Fire Burn All Night”) the album’s sole co-write. Because of both musicians’ close connection to Columbia Records, they drew on a number of related artists to back them up on their eponymous disc. While the names Leland Sklar, Russ Kunkel, Michael McDonald, J.D. Souther and Leo Sayer don’t suggest anything remotely approaching straight-ahead rock’n’roll, all were near the top of their soft-rock game in the late 70s, and their presence gives Craig Fuller / Eric Kaz a familiar air. Listening to the “expanded edition” (one extra track, a single edit of the original LP closer “Annabella”), one might think, “Hey, I’ve heard these songs before, years ago. Were they hits?”

One would likely be wrong on both counts, but the feeling of familiarity remains. David Campbell‘s string arrangements – most notably on “’Til You Come Back” – sound like the kind of thing Paul Buckmaster did for Elton John a few years earlier.

Ultimately, Ed Osborne’s liner notes essay – drawing upon in-depth interviews with both musicians – is the most interesting thing about the reissue. In one of those bits of trivia that supports the theory that everything is connected, Osborne explores Kaz’s earlier involvement with the proto-Latin rock version of The Blues Magoos.

There’s not a thing wrong with Craig Fuller / Eric Kaz. Polished to a shine, the album presents these yearning, often melancholy songs in the best light possible. But in the late 1970s, there was simply so much of this kind of thing that it was easy to miss a few efforts, however fine they might’ve been. Musically, the album drifts by pleasantly enough, but it leaves little lingering impression. “That was nice,” you might say after “Annabella” fades out. “But now let’s listen to something with a little oomph in it.”