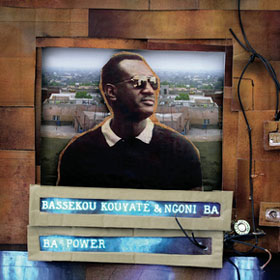 Ask most informed music enthusiasts to cite an example of “world music” from Africa, and one of the first names offered up will likely be Malian guitarist/vocalist Ali Farka Touré. Thanks in large part to Talking Timbuktu, the 1994 album (Touré’s twelfth) released in collaboration with Ry Cooder, the music of the late Touré is the standard by which much world music is measured.

The term itself is more than a bit suspect: in most cases all it really means is music originating from somewhere outside North America and Europe. And that’s a pretty narrow way of looking at things, the same kind of mindset that leads some to refer to certain countries in Africa and elsewhere as “third world.”

The seeds of much that is called American music had their origin in Africa. And that may well be the reason that – labels aside – for Americans, there is often something familiar (on an almost molecular, unconscious level) in music that originates in what was once known as the dark continent.

In any event, when one approaches the music of Malian lute master Bassekou Kouyaté, the sonic touchstones are the preconceived idea of world music, and the international appeal of Ali Farka Touré. Adopting an approach similar to the one used on Talking Timbuktu, the latest album from Kouyaté aims to synthesize a current-day American style (rock) with a homegrown one. The ancient Malian lute known as the ngoni is the “lead” instrument on Ba Power, and Kouyaté’s backing musicians (known as Ngoni Ba) supply more ngoni textures (there are four ngonis played on the album, including one played by son Mamadou Kouyaté that has a bass frequency range) along with percussion, vocals and – on several tracks – drums (Dave Smith from Robert Plant‘s group) and trumpet (Jon Hassel).

In keeping with the rock-leaning aesthetic of Ba Power, the arrangements make use of wah-wah and distortion pedals, effects customarily applied to electric guitar. But they add fascinating textures to the ngoni, and help to root the music in a fashion more accessible to American ears. The bass ngoni – which often doubles the melodic lines of the upper-register instruments – helps lay down a propulsive, solid musical foundation.

When the vocals are present (Koyaté’s wife Amy Sacko), the scales and textures of the voice are clearly rooted in African tradition. Sacko sings [I think] in Bambara, the indigenous language of Mali. (French is the country’s official language, and Ba Power‘s gatefold LP sleeve features English and French lyric translations.) But during the instrumental-only passages, the music is decidedly rock-oriented, albeit interpreted on non-western instruments.

Many of Ba Power‘s nine tracks (all under six minutes) feature extended passages built around a single chord, giving the music a hypnotic effect. The dizzying percussion pushes the music forward constantly, and the guest musicians – most notably trumpeter Hassel and an electric organist – add to the texture without ever calling much attention to themselves.

There are bits of electric guitar on Ba Power, but they’re played by guest musicians and are subtly mixed. So it’s Bassekou Kouyaté’s ngoni-through-pedals that you’ll hear blasting out the opening licks of “Aye Sira Bla” (“Make Way”), which the liner notes explain is a reworking of a traditional praise song. With no Malian frame of reference, it sounds to these Western ears like a pretty hot riff-based tune.

And in the end, it’s that Western musical perspective that most listeners outside of Mali will bring to their enjoyment of Ba Power. It’s exotic, yes, but the album is rooted in just the right amount of rock aesthetic to be a genre-bridging exercise that’s fun to hear, and one suspects it’s not any kind of sellout that would betray the music’s indigenous character.